Federation soldier with a knife

Alex Johnson joined the United States Marine Corps and served in the Force Recon alongside Keegan forming a strong bond, before Ghosts birth. Both he and Keegan would later joined Ghosts together under command of Captain Rorke, Lieutenant Walker and Sergeant Merrick. They, or the Marine Corps, gave him the nickname "Ajax".

"What the hell is it targeting?"
— Ajax to the squad about the missile truck.

Ajax was part of Operation: Return to Sender, to kill General Almagro. At the time he was the least experienced and youngest of the team. During the Caracas dam's burst and subsequent flooding of the city, Rorke, Walker, Merrick, and Ajax managed to find and kill Almagro. Ajax managed to escape along with the remaining Ghosts after Rorke's fall.

Capture by the Federation

Ajax was captured by Gabriel T. Rorke shortly before the mission No Man's Land. Logan, Hesh, and Riley witness Rorke taunting Ajax by "shooting" him with an unloaded P226. Rorke then orders his men to take Ajax and move everything to 'Firebase Charlie'.

After being brought to 'Firebase Charlie' (a baseball stadium featured in the mission Struck Down), Ajax is seen being beaten and then knocked out by the Federation. After intimidating his torturers by showing them his middle finger, a soldier knocks the back of his head with an SC-2010 before being moved to a new location to be tortured by Rorke, during which he divulges the location of the Ghosts' Las Vegas safehouse. When the player finally reaches Ajax a Federation soldier stabs him in the stomach with a knife, they find him mortally wounded as Keegan holds him in his dying moments. Ajax tells the rest of the Ghosts of Rorke's kill list. Ajax then bleeds out and dies.

Ajax is mentioned in The Hunted when Elias interrogates Rorke, with the latter mocking him by stating "if he was still with us".

Ajax appears in Call of Duty: Mobile, introduced in the Season 5: In Deep Water Comics where he makes a brief cameo. 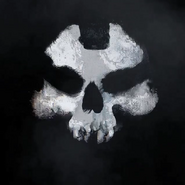 Ajax's cameo in the Comics.