"Born a US citizen after mother immigrated from Sinaloa under asylum. Joined Army at 18. Despite "disciplinary issues," passed selection for Task Force Orange. Served in Afghanistan, adept in combat and indigenous relations."
— In-game biography

Alexia Valenzuela was born in the United States of America in 1991. Her mother immigrated to the US from Sinaloa as asylum seeker. She joined the United States Army at 18 where she excelled in written, cognitive and physical performance. However, four incidents of "disciplinary issues" and "problems with authority" were reported.

She later entered and passed selection for Task Force Orange with noted reservation from Senior Drill Sergeant, Sergeant First Class William Griggs. As part of Task Force Orange, Valenzuela was deployed in Afghanistan in 2010. In 2014, "Alice" and Wayne "D-Day" Davis conducted an unsanctioned assault on a Taliban stronghold in the Kandahar province to rescue Private Grayson Jeffries. Alexia planned and directed the successful pacification of the stronghold but Jeffries was found dead. As a result, "Alice" was demoted and Davis was discharged under Section 8.

After the Kandahar incident, she was reassigned to support roles for the following three years, including training Afghan female soldiers. During that time, she filed several requests for combat assignment and was finally chosen for Demon Dogs in October 2019. She contacted and recruited "D-Day" for Demon Dogs the same month.

On March 3rd 2020, Al-Qatala's new leader Khaled Al-Asad launched an full-scale assault against Verdansk in Kastovia. Operators from Coalition and Allegiance were deployed to Verdansk to stop Al-Qatala as part of the Armistice initiative.

Alice appears in Call of Duty: Mobile and was added as part of the Season 10: Shadows Return Battle Pass. [1] 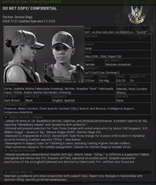 A render of Alice in her Down Range skin.