The Alien Fuses are a pair of extraterrestrial fuses found in Call of Duty: Infinite Warfare Zombies.

The Alien Fuses are first introduced in the map Zombies in Spaceland. During the final boss in the map's main easter egg, an Alien will appear from the main teleporter. On his back is a backpack-like item, which has two fuses installed into it. When the player manages to get the Alien into a kneeling position, the player can knife his back, causing a fuse to drop out. Repeating the process again will cause the second fuse to drop. Once the player has killed the Alien, the player can pick up the Alien Fuses in front of the main teleporter.

Rave in the Redwoods[edit | edit source]

In Rave in the Redwoods, the fuses will remain in the Pack-a-Punch Machine if the player has completed the Sooooul Key easter egg on Zombies in Spaceland.

The Alien Fuses return in Shaolin Shuffle. Unlike Rave in the Redwoods, the fuses are not automatically installed into the Pack-a-Punch Machine, even if the player has completed the Sooooul Key achievement. In order to access them, the player must first gain access to the Pack-a-Punch Machine itself. Inside the Projection Room is a button to the left of the machine. The player must press the button and quickly exit the room. Using the teleporter outside of the building containing the portal to the Pack-a-Punch Machine, the player will be teleported to the rooftops by Racin' Stripes. To the left of the portal the player just used is a box containing the fuses. If the player is too slow in reaching the box, it will be shut and the button will have to be pressed again. Alternatively, one player can press the button inside the projector room, and another can wait by the box to pick up the fuses.

Once the player has grabbed the fuses, bring them into the subway tunnel containing Bang Bangs and place them in the electrical current on the side of the tracks closest to the stairs leading aboveground. The player now must wait for the subway to go over the tracks with the fuses in place. Once the subway runs over the fuses, they can be picked up again and installed into the Pack-a-Punch Machine, allowing the player to double Pack-a-Punch weapons like before.

The Beast from Beyond[edit | edit source]

Like Shaolin Shuffle and Attack the Radioactive Thing, the player must complete a small easter egg in order to insert the fuses into the Pack-a-Punch Machine. Inside the hallway containing the Proteus is a fuse box, which is located above the Magic Wheel location within said room. Either shooting it or meleeing it will open it, revealing the uncharged fuses, which can be picked up by the player.

The player must now find the three pieces of the bridge to the Pack-a-Punch portal, obtain the Entangler by completing the first two skulls for Skullbreaker and obtain the Zombies in Spaceland film reel from within the real world version of the Afterlife Arcade. Once the player has done that, they can bring the film reel to the Projector Room and insert it in a slot between the two film reels on the Pack-a-Punch Machine projector, which will cause footage from Zombies in Spaceland to play on the bigscreen in the theater.

With the Entangler, the player must activate the Movie Wormhole Trap and zap the rift in the center of the bigscreen once the trap is active, which will grab a Brute's head from within the movie. The player must now drop the head on the ground and pick it up and bring it to the cardboard cutout of the Brute in the main hallway of the theater. Before placing the head on the Brute cutout, the player must place the uncharged fuses on the left hand of the Sasquatch cutout across from the Brute's. Once that is done, the player can place the Brute's head on the Brute cutout, which will send a beam of energy to the fuses on the Sasquatch's hand, charging them. The player can then grab the fuses from the hand of the Sasquatch cutout and place them within the Pack-a-Punch Machine. 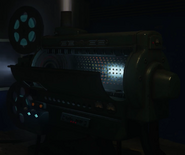 The Pack-a-Punch Machine with the Alien Fuses installed into it. 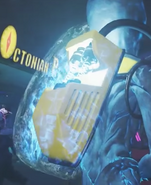 The Alien Fuses seen in the Alien's backpack-like object.
Add a photo to this gallery

Retrieved from "https://callofduty.fandom.com/wiki/Alien_Fuses?oldid=2412644"
Community content is available under CC-BY-SA unless otherwise noted.