"Death ray from the laboratory of a paranormal researcher."
— Blackout Description

Alistair's Folly is a wonder weapon featured in the Call of Duty: Black Ops 4 Zombies map, Dead of the Night. It can be obtained through either using the Mystery Box, or by unlocking it from a wall through a small easter egg requiring the player to find four coloured letters around the map and inserting them into the safe lock to open the safe and obtain the weapon.

Designed and created by Alistair Rhodes, Alistair's Folly is a revolver-like projectile weapon capable of firing small green explosive rounds, causing great amounts of damage to enemies while unaffecting the user. The weapon has a total of twelve rounds in its chamber, and another ninety-six in reserve. Similarly to the Ray Gun, the weapon will move the user backwards slightly when firing.

The locations for the symbols are:

In the Library is a secret room hidden behind a bookshelf to the right of the Silver Bullet dispenser. The player must melee the shelf with the Ballistic Shield, causing the room to open and revealing a piece for the Chaos Theory. The player must now acquire Werewolf Chaos Material, which can be sourced by killing a Werewolf with a gun using silver bullets. Upon acquiring the material, the player can insert it into a machine under the telescope in the Greenhouse Laboratory, causing it to become Prima Materia. With the Prima Materia, the player can combine it with the Chaos Theory piece from the Library on a specific crafting bench in the Greenhouse Laboratory, allowing the player to acquire the Chaos Theory. Design wise, this version of the weapon features a new set of iron sights and a turquoise colored light as opposed to the normal green.

The Chaos Theory acts similar to the normal Alistair's Folly, but the player can now charge a shot, which will take three normal shots from the chamber when used. This charged shot will either create a yellow pool of acid, which causes enemies to become stunned and confused for a few moments before exploding, or will create a blue whirlwind, which will pick up enemies close to it and swing them around within it until they are killed. The Chaos Theory also retains the same amount of ammunition as the normal variant and later Alistair’s Annihilator.

Once the player has collected the two new Prima Materia and the new part, the player can assemble Alistair's Annihilator from the Chaos Theory at a certain crafting bench in the Greenhouse Laboratory. This version allows the charged feature to have two new additional effects; the first charged shot will create a green portal on the ground, causing enemies that come into contact with it to instantly shrink out of existence, while the second charged effect will summon a small fireball that vaporizes enemies near it. Along with this, the other two previous charges are present. The weapon also gains a unique scope, a deep blue colored light, and retains the same ammo count as the other two variants.

Alistair's Folly can be found in the Mystery Box or from killing the Blightfather in Blackout during the Operation Apocalypse Z event. Unlike its Zombies counterpart, the weapon has six shots in its chamber before it needs to reload, and interestingly uses .45 Cal ammunition, allowing the player to replenish its ammo unlike other wonder weapons found in Blackout. 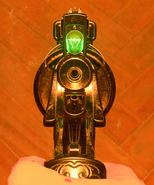 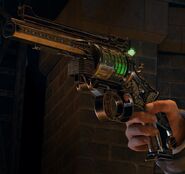 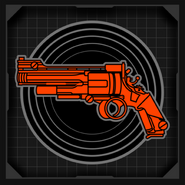 The Chaos Theory on its crafting bench.

The Chaos Theory as seen in first person.

Alistair's Annihilator on its crafting bench. 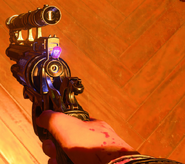