Turned to stone by Medusa

"Scarlett, we all owe your father a great debt. We will do whatever it takes to get him back."
— Bruno Delacroix

At some point, he, alongside two other members of The Order were turned to stone by Medusa.

Alistair Rhodes on the cover of the first issue of Call of Duty: Zombies 2

Alistair Rhodes as seen in the Dead of the Night intro cinematic, where he is captured. 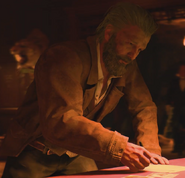 Alistair Rhodes as seen in the Dead of the Night Director's Cut video.

Alistair, turned to stone.
Add a photo to this gallery

Retrieved from "https://callofduty.fandom.com/wiki/Alistair_Rhodes?oldid=2496351"
Community content is available under CC-BY-SA unless otherwise noted.