For other uses, see All or Nothing.

"Defend the U.S.S. Liberator during the assault on the Federation."
— Mission Description

"All or Nothing" is the fifteenth campaign mission of Call of Duty: Ghosts, in which Logan and David "Hesh" Walker are defending the U.S.S. Liberator, the United States' last aircraft carrier from the Federation.

The mission takes place directly after the events of "Sin City". Hesh is furious over his father's death and wants immediate revenge, but Merrick says they need to stay focused on the task at hand. The group is then taken to the U.S.S. Liberator so Merrick and Riley can be treated for their wounds. Merrick places Hesh in charge of the mission as field commander, takes Elias's position as grid coordinator, remarks on Elias's success within the Ghosts, and gives Logan Elias's Ghost mask. Riley's last seen at the very beginning which Hesh claims his job's done and he's going with Merrick who claims he'll be safe.

Three days later, the USS Liberator carrier battle group falls under a full-scale attack by Federation helicopters and zodiacs. Logan puts on Elias's mask and gears up for battle. F/A-18E Super Hornets are scrambled to suppress the enemy choppers. After saving a V-22 Osprey from being destroyed, it is later reconfigured with numerous weapons and Logan takes control of a remote turret tablet for the Osprey. When it takes off, Logan uses it to destroy several zodiacs to prevent more Feds from boarding the ship. Moments later, a Shaanxi Y-8 gunship comes in and presumably destroys the Osprey (because you can't use it again after that). Logan and Hesh run to Sparrow Missile-launching defense platform, and use the missiles to take out the gunship, but a kinetic rod, launched from the LOKI Space Station, impacts the USS Liberator. It slowly begins to capsize on its left side, as Hesh and Logan are constantly avoiding hazards like the falling control island and sliding helicopters and jets. They eventually are rescued by a surviving Black Hawk, to join the main assault on the Federation satellite array, which will allow astronauts to commandeer the LOKI space station and use the rods against the Federation.

Main article: All or Nothing (Ghosts)/Transcript 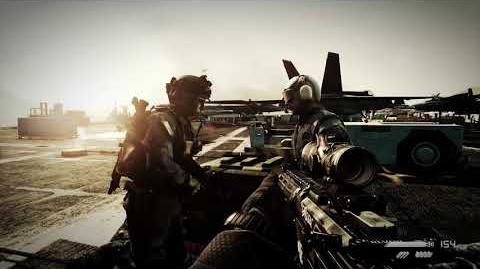 Retrieved from "https://callofduty.fandom.com/wiki/All_or_Nothing_(Ghosts)?oldid=2548328"
Community content is available under CC-BY-SA unless otherwise noted.