The Ameli is a very average general purpose machine gun, lacking a special gimmick in its class. It has a high rate of fire, alongside moderately-low recoil. It also possesses high damage, and has a colossal range, easily capable of killing enemies fast from afar. These aspects make the Ameli very well suited for a ranged combat role, being able to land powerful and accurate shots very fast.

A fully-upgraded Ameli is a devastating weapon. However, the Thermal Scope received at Mk4 upgrade can make using the weapon difficult. 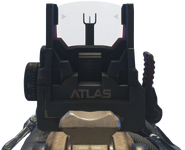 Retrieved from "https://callofduty.fandom.com/wiki/Ameli?oldid=2227299"
Community content is available under CC-BY-SA unless otherwise noted.