Alive (in No Russian)

Unknown (after No Russian)

MP5K (only seen in glitch)

"Ну шевелитесь! (Come on!) Get in. We've sent a strong message with this attack, Makarov."
— Anatoly to Makarov at the end of No Russian.

Anatoly (Russian: Анатолий) was a Russian Ultranationalist/terrorist who appeared in Call of Duty: Modern Warfare 2 during the mission "No Russian".

Anatoly's picture in Back on the Grid's briefing cutscene. 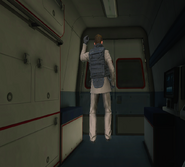 Anatoly inside the ambulance waiting for Makarov and his team.
Add a photo to this gallery
Retrieved from "https://callofduty.fandom.com/wiki/Anatoly?oldid=2514282"
Community content is available under CC-BY-SA unless otherwise noted.