Call of Duty Wiki
Register
Don't have an account?
Sign In
Advertisement
in: Call of Duty: WWII Civilian Characters, Civilian

Anna is a minor character in Call of Duty: WWII. She is one of the German citizens who take shelter in the Allendorf hotel basement during the U.S armed forces invasion of the Germany city of Aachen.

During the 1st Infantry Division's raid of the Allendorf hotel, they enter the wine cellar. Joseph Turner hears a kid making noise and asks Ronald "Red" Daniels if he still has a chocolate bar. Daniels pulls out a chocolate bar and Anna, who is hungry, runs toward him. Her sister, Erica, tries to stop her from going over to them, which compromises the German civilians that have taken refuge in the hotel. Turner orders Daniels and Frank Aiello to go get the abandoned German transport truck to help evacuate the German citizens, defying his original orders, much to the frustration of Sgt. Pierson.

During the evacuation, Erica realizes that she forgot her little sister Anna. Lt. Turner allows Red to go inside the hotel to find and bring back Anna, only to come face-to-face with several German soldiers that had entered the hotel. Red finds Anna and sneaks past several groups of soldiers that are searching for him. At the same time, more German soldiers approach the hotel and the 1st Infantry Division fight and push them back. Daniels manages to evade discovery by the Germans, all while carrying Anna mere meters from heavy fighting to the truck to be evacuated.

Just before the truck is to depart the evacuating civilians to safety, two enemy stragglers fires on the team and the civilians as they are about to leave the hotel. In the ensuing firefight, Erica is hit and dies instantly. Anna is last seen holding Erica's body, crying next to her sister. Anna is thought to have been taken to safety, along with the rest of the civilians. 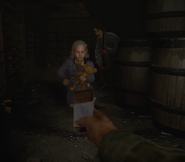 Anna being carried by Ronald "Red" Daniels in a room.
Community content is available under CC-BY-SA unless otherwise noted.
Advertisement