KG M40, any weapon obtained by the player

"The German occupation of Austria shattered families. Those who fought back forged a new family. Anna Drake lost all she loved to the Nazis. She refused to lose again. Rage this fierce can't be caged. Some fires are too hot to snuff. The resistance always lives on. As long as the world needs vengeance, survivors will find a way."
— Carver Butcher

Anna Drake is an Operator of the Yeti faction featured in Call of Duty: Vanguard and Call of Duty: Warzone. Anna was released with Season Two as part of the Battle Pass.

Born in Vienna in 1923, Anna Drake enjoyed a life of hiking and skiing until the annexation of Austria into Nazi Germany in March 1938. In November 1938, during the Kristallnacht, her home was demolished while her friends and family were executed. Anna was taken prisoner, but managed to escape by planting an improvised explosive device inside the munitions factory at her labor camp. After this, Anna joined the O5 Network.

At some point, Anna was arrested but used an improvised firearm from her cell to eliminate a guard and retrieve the keys to free the other prisoners. Leading the jailbreak, Anna escaped once again.

Between late 1944 and early 1945, Anna was approached by Carver Butcher and the S.O.E. to form and lead Task Force Yeti with the goal of infiltrating a German stronghold inside a medieval castle in the Alps. Led by Butcher, alongside Gustavo dos Santos and Thomas Bolt, Anna entered the castle in search for information regarding Nebula V. The team fought their way to reach a door where Nebula V was stockpiled, a German soldier released the gas while celebrating the Fourth Reich before Anna shot him. The team regrouped with Butcher, quickly leaving the area as the gas spread throughout the castle as German soldiers tried to escape the castle.

At some point after the war, Anna would join Task Force Vanguard's Arthur Kingsley, Trident's Lewis Howard and Harpy's Florence Carter in pursuing a helicopter carrying Nazi gold. The helicopter crashes in a jungle and upon reaching the crash site, the team come across Butcher who was joined by Ikenna Olowe and Callum Hendry who were also after the gold. Both teams proceed to fight each other over the gold. 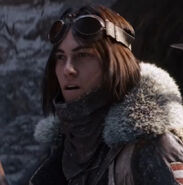 Anna, Florence, Lewis and Arthur in the Season Four cinematic. 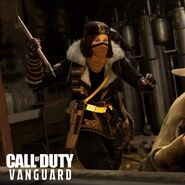 Anna and the rest of Task Force Yeti on the Season Two Art.

Anna as shown in the Wild One Calling Card.