Upon completing Paradoxical Prologue, the revised Fly Trap easter egg within The Giant, players will be able to obtain the Annihilator in their special weapon slot. It holds a total of 18 shots, and can kill a zombie with a single headshot up to round 24, or 33 with Double Tap Root Beer. Shooting a zombie with the Annihilator in The Giant will disintegrate the the Zombie (unless Insta-Kill is active). 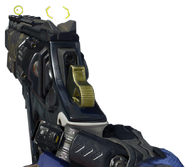 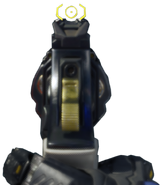 The Annihilator spawning in The Giant after completion of the Paradoxical Prologue easter-egg.

The icon used in the Zombies HUD for Call of Duty: Black Ops III. 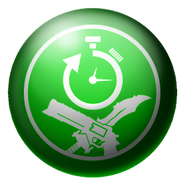 The Annihilator as seen on the Arsenal Accelerator GobbleGum

The Annihilator returns in Call of Duty: Black Ops 4 as the Specialist weapon for Seraph in multiplayer. Functioning similarly to its prior incarnation, the Annihilator fires extremely penetrating rounds capable of piercing multiple surfaces and targets. The main difference however is that it is double-action, giving it a higher fire rate.

Seraph firing the revolver in a reveal image

6 rounds (costs 10 Ballistic Experts per round)

"High material penetration ammo allows you to track nearby enemies and kill without aiming."
— Description

The Annihilator returns in Call of Duty: Mobile as an Operator Skill. It was added as part of the Season 6 Once Upon a Time in Rust update.