"W-Where am I? W-What is happening? It's collapsing! The confluence is occuring! Yuri! The children!"
— Gersh in Gorod Krovi

Doctor Gersh joined the Ascension Group on October 19th, 1955, with Yuri Zavoyski. The Ascension Group was formed in the Soviet Union less than a decade prior their arrival in the organization in 1946 by former member of Group 935, Harvey Yena.

By 1957, Gersh oversaw a project of teleportation. As a result, the Ascension Group successfully completed work on a functional matter transference device.

Few days later, on November 4th, 1963, Gersh announced to the Committee that Project Thunder was nearing completion and revealed that Yuri may needed to be removed from the Ascension Group as he became hostile towards other scientists and frequently muttering to himself. The next day, Yuri, who was consumed by Samantha's voice after reading Ultimis Richtofen diary, tricked Gersh into activating a Gersh Device. The rift created allowed Samantha to travel through. It also absorbed Gersh, destroying his body and trapped him inside the Casimir Mechanism.

When Ultimis arrived at the Ascension facility on November 6th, 1963, an outbreak occurred. Ultimis managed to free Gersh, who maintained his now ethereal form, from the Casimir Mechanism. Gersh then sent them into a rift to their next destination before beginning his travels across space and time.

After wandering through time and space for some time, Gersh arrived at Stalingrad in the Agonia fracture. In this fracture, World War II never ended and the Battle of Stalingrad continued forever. In the city, S.O.P.H.I.A. requested Primis to retrieve Gersh as part of the Ascension Protocol. As Gersh kept floating around, he constantly rambled on and on about his state of existence. After being provoked enough times, he began to recognize the crew, though he did not realize that they are not the same as Ultimis. Gersh agreed to travel to S.O.P.H.I.A.'s location, where she proceeded to extract information from him, a process that she claimed to be "mostly painless". However, the process proved fatal for Gersh as he was heard screaming in agony. 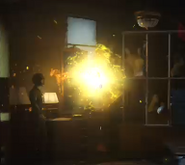 Gersh (right) alongside Yuri (left) in the Classified intro.