Arctic Recon is a downloadable Special Ops Mission Mode challenge in Call of Duty: Modern Warfare 3 as part of Content Pack 6. It was available for Call of Duty ELITE subscribers on the Xbox 360 on June 19, 2012. ELITE subscribers on the PlayStation 3 received it on July 19, 2012. It was available for PC players via the Steam service on September 13, 2012.

Baseplate gives the orders to plant beacons on a ship, Kuvalda, to guide missiles which will destroy the ship. Players control a Recon Drone that has a mounted MP5 and thermal vision that is used to designate places where beacons must be placed beforehand. After which, they are extracted via helicopter before the missiles blow up the ship.

Concept art for the level.

The Recon Drone's view when activated. The transmitters are marked as red squares.

The Recon Drone is outfitted with Thermal Vision and a minigun to engage enemies.

The Recon Drone must tag the transmitter before the player can plant the beacon.

Once the player has planted all 4 beacons, he must fight his way back to the starting point for extraction.

The player is marked as a giant green square from the Recon Drone's PoV.

) - Complete the "Arctic Recon" Special Ops mission on any difficulty

) - Complete the "Arctic Recon" Special Ops mission in under 3:30 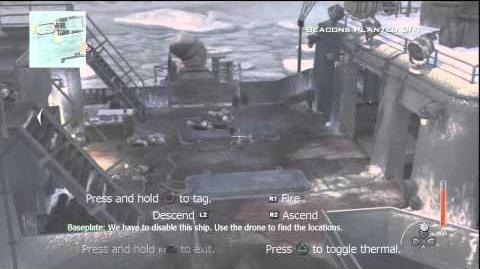