Battle of the Bulge and Ambush

"Battle around a German encampment and vehicle convoy in the snow-covered Ardennes Forest during Battle of the Bulge. Fast-paced sort to medium range engagements."
— Description

Ardennes Forest is a multiplayer map in Call of Duty: WWII.

During the private beta, a Spotify barcode was added into the map[1]. Using the Spotify app, the barcode led to an audio message called "Intercept Charlie"[2]. The message ended with a letter in morse code repeated seven times.

"All spots should target the stripes. Reports confirm tigers are most susceptible when they are drinking water. All those who are prosperous, break your ties. From now until the leopard wakes, we fight together. Pour la mère patrie (For the motherland). Pour le monde (For the world). BBBBBBB" 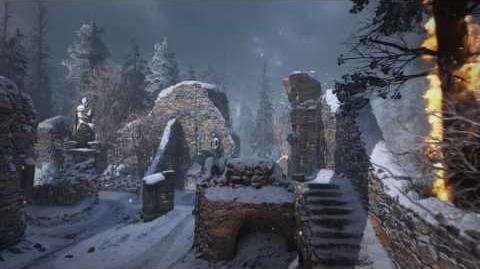 Retrieved from "https://callofduty.fandom.com/wiki/Ardennes_Forest?oldid=2447085"
Community content is available under CC-BY-SA unless otherwise noted.