Call of Duty Wiki
Register
Don't have an account?
Sign In
Advertisement
in: Call of Duty: Black Ops III Gametypes

For the cut game mode in Modern Warfare 2, see Arena.

Arena is a game mode in Call of Duty: Black Ops III. It is the new version of League Play.

In arena, the player will be placed competitively against opponents of a similar skill level. The player's rank is ranked on wins alone. There are twenty ranks, with Master Division being the highest. Players will be dropped a tier if they suffer two consecutive losses. Each arena season has a duration of 30 days, each new season will reset the player's rank back by several ranks.

In a title update, Arena challenges were added; Season Vet and Best Rank categories. These challenges do not need to be completed for the 100 percenter calling card in Multiplayer. To obtain the Season Vet Master calling card, the player must get 15 wins in Arena each season for a total of 12 different seasons. To obtain the Best Rank calling cards and the Arena Master, the player must increase their and rank up to a max rank of 20. 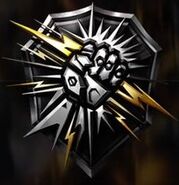