The Arisaka is the standard issue rifle of the Imperial Japanese Army. The Arisaka is found in all of the U.S. Marine Raider Pacific campaign missions (besides "Black Cats") and usually found en masse with the Type 100. The weapon can be used rather than the M1 Garand depending on the user's choice; the Arisaka has a faster reload time and an abundance of ammunition, or the faster rate of fire of the M1 Garand. It is common to see Japanese Banzai Chargers with an Arisaka that has a Bayonet attached charging the player. When struck by the Banzai unguarded, the player must kill the Japanese soldier by pressing the melee button. A Scoped Arisaka can sometimes be found as well, utilizing a different sight inside the scope from the multiplayer variant, much like the Mosin-Nagant. The Arisaka with a Sniper Scope attached is used by snipers tied up in the palm trees, as well as being found in or near Japanese weapons caches.

The Arisaka is unlocked at level 4.

It is good to note that all bolt-action rifles have the same accuracy, base damage, reload time and range. Accuracy is all dependent upon the user's ability, and when aim is steadied if the Sniper Scope attachment is in use. Bolt-action rifles are only different in bolt cycling rate and scope idle sway, although those differences are negligible.

It is tied with the Mosin-Nagant for the lowest rate of fire. This weapon performs well at long range and mid-range, but close range combat should be avoided, if possible, which applies to all bolt-action rifles (unless fitted with Bayonets).

The dynamic for the whole weapon changes when the player unlocks the Sniper Scope attachment; damage is increased, accuracy over range is increased (if the aim is steadied), reload time is increased, and there is a separate aiming mechanism. The Arisaka has one significant advantage over other scoped bolt-actions: if the player crouches, the amount of idle sway is reduced from 60 to 45, making it the most accurate bolt-action, but still not as accurate as the PTRS-41 or an M1 Garand with an attached Sniper Scope. However, the Arisaka dips up and down while the bolt is being pulled back, reducing visibility. It is extremely quiet, the quietest in both scoped and non-scoped forms, giving the player using it some degree of stealth. However, the weapon will still be heard across the map, like every other bolt-action sniper rifle in Call of Duty: World at War. This makes it the best bolt-action sniper rifle in the eyes of players who care more about accuracy and stealth than rate of fire.

For players who care more about rate of fire, the Springfield is the better bolt-action sniper rifle. Some players also see the Arisaka's scope position as somewhat awkward, but this is because the bolt handle sticks straight out, and if it were mounted on the top of the weapon it would hit the scope.

When a Bayonet is attached to the Arisaka, players function as marksmen for ranged combat, but can also repel or charge nearby enemies with the increased melee reach of the blade (just like the Banzai chargers in the campaign).

The Arisaka makes its Nazi Zombies debut in Shi No Numa, where is replaces the role of the un-scoped Kar98k to fit with the setting of Imperial Japanese Army Zombies. This is the only time it appears in the series without the use of exploits. Like all of the other bolt-action rifles, it is only good in the first few rounds, and should be exchanged for a different weapon as soon as possible. However, it can be used a bit longer if the player likes to rack up on headshots, because the Arisaka is capable of one-shot kills if it hits in the head, up to about round six to eight. Since it costs a meager 200 points, one can buy it to headshot zombies, during early rounds, where the Colt M1911's ammo might expire, in doing so. Unlike the Kar98k, only the un-scoped variant is available.

In Der Riese, through the use of console commands on the PC, players can obtain the Arisaka and even be capable of upgrading it through the Pack-a-Punch machine and obtain "The Eviscerator", which was the name originally given to the Pack-a-Punched Type 99.[1] It seems to perform exactly like "The Armageddon", the Pack-A-Punched Kar98k. Why it exists is unknown, but it seems it was cut out at an early stage. There are no engravings on the metal like the other weapons; the only part that changes is the metal, where it turns to stainless steel.

The Arisaka, as seen in World at War. 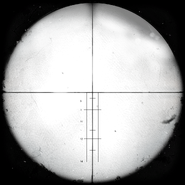 Render of the Arisaka's model.

A Banzai Charger runs with his Arisaka. 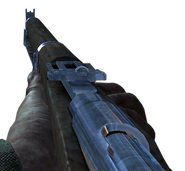 The Upgraded Arisaka (The Eviscerator).

The rifle operates continuously if the trigger is held long enough. This characteristic among bolt-action rifles in the game is unique to the Type 99.

The Arisaka appears in Call of Duty: World at War (Nintendo DS). However, the in-game name for the Arisaka is the Type 99 rifle. It has an absurd 30 round magazine and sports obstructive iron sights as well as a very slow bolt action cycling, and the damage is that low that a one hit kill headshot is nearly impossible, and in the time the bolt is cycled the opponent will have already recovered health and possibly killed the Type 99 user. This aspects make the Type 99 one of the less, if not the least used weapon in Multiplayer.

The Arisaka is available from the wall in Shi No Numa, and from the Mystery Box on other maps. It functions like it does in its console counterpart.

Getting the Arisaka from the Mystery Box.

The Arisaka returns in the revised version of Shi No Numa, available for those who purchased the special editions of Call of Duty: Black Ops or the Rezurection map pack. It can be purchased off of the wall in the starting room and is virtually identical to its counterpart in World at War. Other than this, it does not make another appearance in the game. 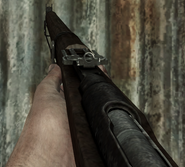 The Arisaka in Black Ops.

Aiming down the Arisaka's iron sights in Black Ops.

The Arisaka returns in Call of Duty: Vanguard as the Type 99.

The Type 99 is Japan's main service rifle. banzai chargers often use it with a bayonet. the Scoped version is also used by Japanese snipers.