Array is a major location featured in Blackout within Call of Duty: Black Ops 4.

Array is located just west of the center of the map and is close to several other areas such as Firing Range and the Construction Site. The area is heavily inspired by the multiplayer map of the same name from Call of Duty: Black Ops.

The area consists of several satellite arrays, a medium sized control center, several storage buildings and hangars, as well as a central command center. Within the command center is a button than enables an emergency broadcast system, which is used to unlock a Dark Ops challenge and is a step within Alex Mason's character mission if the player is able to obtain the Stained White T-Shirt. 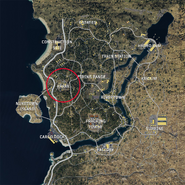 Array's location on the map.
Add a photo to this gallery
Retrieved from "https://callofduty.fandom.com/wiki/Array_(Blackout)?oldid=2467254"
Community content is available under CC-BY-SA unless otherwise noted.