"The risen dead have overtaken a Soviet Cosmodrome and all Hell has broken loose. The countdown to the zombie apocalypse has begun."
— Level description/Mission Briefing

The Ultimis crew traveled to a Soviet Cosmodrome in 1963 from Group 935's Kino facility via a Lunar Lander to recover Richtofen's diary. The group also need to free a Soviet scientist from the Ascension Group named Gersh from the Casimir Mechanism along with the fact that they must face limitless hordes of the undead as they continue their journey.

Among the new additions to the Zombies mode are two Wonder Weapons, the Gersh Device and Matryoshka Dolls (replacing the Monkey Bombs). Double Tap Root Beer does not appear, but two new perks are introduced: PhD Flopper and Stamin-Up (In the remastered version in Black Ops III, Widow's Wine replaces PhD Flopper and a Der Wunderfizz machine is added to include Double Tap Root Beer 2.0 and Deadshot Daiquiri as they aren't physical perk machines in the map).

A new enemy, the Space Monkeys, also appear in this map, replacing the Hellhounds and Pentagon Thief. A new Power-Up, the Random Perk Bottle is also available.

Ascension features two new perks, both costing 2000 points. However, Double Tap Root Beer does not make an appearance in the original map in Black Ops. Each player can only have four perks at a time, with the exception of already having four and obtaining the Random Perk Bottle to obtain all five (now six) perks at once as viewed here.

PhD Flopper; located outside near the "D" Lunar Lander launch pad (Black Ops version only) that has the Fragmentation Grenades. This perk makes the player create a small "nuke" when diving to prone. The "nuke" will only take effect if the dive-to-prone would normally hurt the player (almost anything above flat ground). In addition, landing directly on top of a zombie seems to neutralize the effect of the nuke. The nuke kills all nearby zombies up until the round 20s. In addition, the player cannot take any fall damage and is immune to any explosive damage done to the player, including the Ray Gun's splash damage, damage when a launcher or the Mustang & Sally is shot too close (such as the M72 LAW, or the China Lake), fragmentation grenades, and Matryoshka Dolls. The player can still take explosive damage after a space monkey tosses back a grenade. The player can also overcook their own grenade without being harmed.

Stamin-Up; located near the AK-74u, towards another Lunar Lander launch pad. This perk gives the player increased movement speed and sprint duration, similar to both Marathon and Lightweight. Since Ascension is a rather large map, it is more useful than one might think, especially during Space Monkey rounds where a player may have to get to a Perk-a-Cola machine that is being attacked. It can also benefit the player when running from Zombies. This is even more useful in Call of the Dead.

The man speaking at the beginning is Gersh and is actually giving the players a mission to complete the node puzzle to repair the Casimir Mechanism. Once the mechanism is repaired, the players will each get a Death Machine that lasts for 90 seconds (as well as gaining all perks in the map in the remastered version in Black Ops III). This serves as the map's major easter egg and requires four players to complete.

A remastered version of Ascension is available on Call of Duty: Black Ops III if the player has purchased the Zombies Chronicles map pack. The map has been designed to look very high quality while still maintaining the look and feel of the original. Differences include new better Zombies artificial intelligence, and futuristic Black Ops III-era weapons are now available in the Mystery Box and the walls instead of the Cold War weapons (although some do return in the box), as well as the original wonder weapons. Additionally, the Ray Gun Mark II can now be obtained from the mystery box. The characters are once again the Ultimis versions of "Tank" Dempsey, Nikolai Belinski, Takeo Masaki and Edward Richtofen.

Zombies, note the two with gas masks in the front.

Loading screen for "Ascension" (Notice the 115 in the rocket's shadows).

The alternate version of the Ascension loading screen from the second issue of the Zombies comicbook series.

"Ascension" on the numbers broadcast paper.

Ascension poster with all of the Wonder Weapons previously featured in Zombies.

Another view of Ascension, similar to its thumbnail.

The rocket rising up in Black Ops Zombies.

Looking towards the rocket in Black Ops Zombies. Note the red reticles.

The rocket being destroyed in Black Ops Zombies. 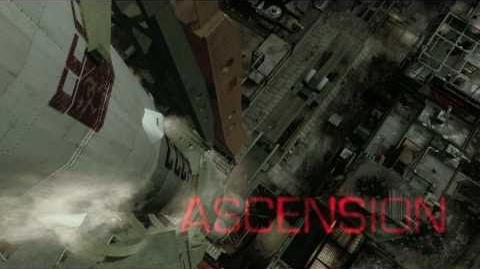 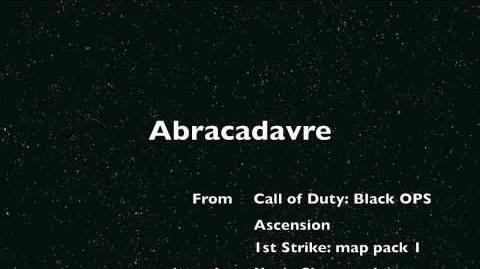 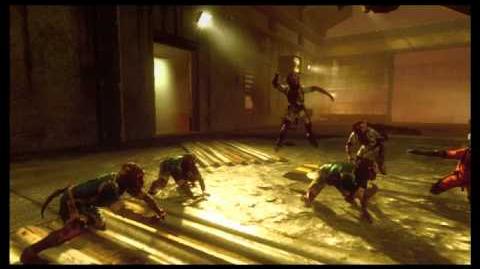 Ascension Game Over Song
Game Over song in Ascension & Call of The Dead. 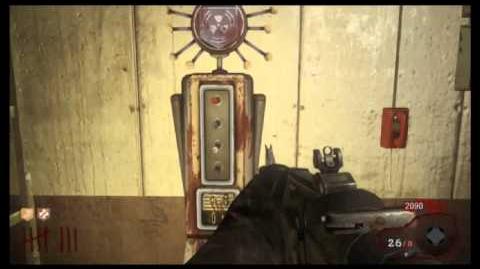 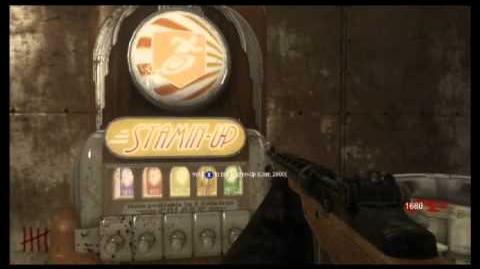 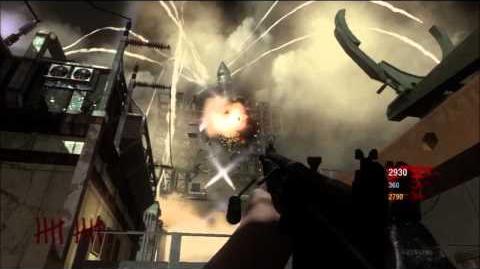 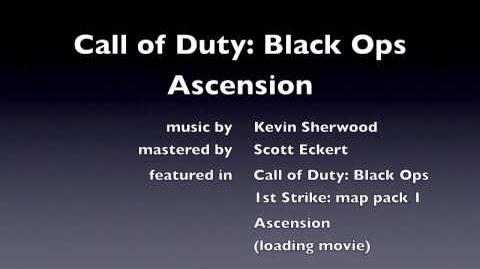 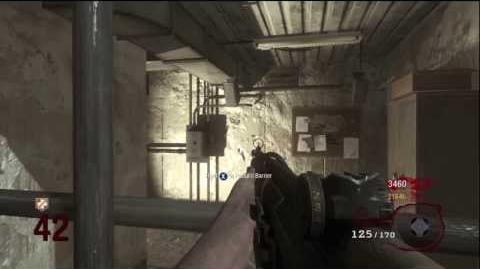