Call of Duty Wiki
Register
Don't have an account?
Sign In
Advertisement
in: Call of Duty: Black Ops Factions

The Ascension Group was formed by former Group 935 member, Harvey Yena on January 26th, 1946 after the Soviet Union hired him at the end of World War II.

On March 1962, the Ascension Group developed PhD Flopper and Stamin-Up after studying Group 935's medicinal elixir research. Few months later, on November, Gersh began working on Project Thunder and by December, Gersh and Yuri Zavoyski began working on Project Mercury. However, over the course of the next year, tensions occured between Gersh and Yuri and by October 1963, Gersh informed the senior staff that Yuri had been removed from Project Mercury and transfered to Rocket research.

Few days later, upon reading Ultimis Richtofen's diary, Yuri began to hear Samantha's voice. Over several days, her voice would consume him, driving him to the brink of insanity. She ordered Yuri to resume his work on Project Mercury and he obeyed.

On November 4th, 1963, Gersh revealed to the Committee that Yuri should be removed from the Ascension Group as he became hostile towards other scientists and frequently muttering to himself. The next day, Yuri, obeying Samantha's wishes, tricked Gersh into activating a Gersh Device. The rift created absorbed Gersh and allowed Samantha to travel through. Yuri was also absorbed and transported to the Pentagon.

On November 6th, 1963, Ultimis arrived in the Ascension facility. An outbreak occured and Ultimis freed Gersh from the Casimir Mechanism. Maintaining his ethereal form, Gersh sent Ultimis into a rift to their next destination before beginning his travels across space and time. The outbreak was contained.

Two days after the incident in the Cosmodrome, it was reported that the Ascension Group was consumed by in-fightning, as different parties vie for control in the absence of Gersh. The Group's future was deemed as "uncertain".

Another version of the Ascension Group logo used in Executive Order.

Gersh and Yuri Zavoyski near the Casimir Mechanism. 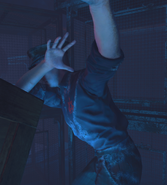 A frozen Ascension Group member in the Tugarin. 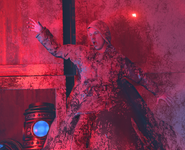