For the Scorestreak with a similar name, see Aerial Assault Drone.
For the similar drones, see UGV and A.G.R..

The Assault Drone is a 10-point (9 with Hardline) Assault Strike Chain reward in Call of Duty: Modern Warfare 3.

The Assault Drone is a small, airdropped ground vehicle that comes equipped with a 50-round MK46 LMG and a single shot rocket launcher. The drone is player-controlled. The drone has unlimited ammo, but still has to reload its weapons. Its weapons can only be reloaded when empty; reloading the Drone's machine gun takes approximately three seconds, and the rocket launcher takes approximately 5 seconds. The drone's weapons are very powerful, and it has a decent movement speed.

The Assault Drone can take much more damage than a standard player can, even being able to withstand a direct hit from an RPG-7[1].

The robot is destroyed after it has taken enough damage or after 60 seconds, if a player looks carefully at the HUD there is a timer on how long the Assault Drone can last. Killing the operator will bring it offline, as will the detonation of an EMP. It can be also taken out by a single, well thrown EMP Grenade, or one shot from a Stinger[2]. Furthermore, the Predator missile, AC-130 cannon and similar controlled aerial killstreaks can quickly destroy it with a precise shot. Unlike the AC-130 and other aerial killstreaks, it can only travel on the ground, which significantly limits its effectiveness unless the map is small. Like all other manually controlled killstreaks, the robot lacks any form of aim assist, potentially making it more difficult for the user to hit targets at a distance. 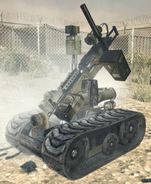 Another view of the drone 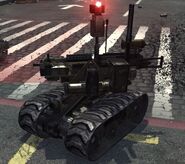 An old killstreak icon for the Assault Drone.