"Ballistic-proof blunt shield weapon. Can be deployed on the ground as cover."
— Create-A-Class description.

The Assault Shield can be found and used in "Celerium". It can also be unlocked in the customized loadout section if the player successfully completes five challenges in "Odysseus".

The Assault Shield is unlocked at level 34. It is classified as a Special in the create-A-class section.

Lethal and tactical grenade usage tends to ramp up as a means to deter Assault Shield usage. Many try to use the splash damage of explosives to try and sneak a hit past the guard of the Assault Shield. The most notable is C4, which can be detonated at almost any time and can be thrown right past the shield. Tactical grenades typically won't kill an Assault Shield user on their own, but they can heavily facilitate a kill, since a stunned or blinded Assault Shield user tends to not get full protection from their shield in a stunned or blinded state, and it becomes harder to put the shield in a position to defend the user from attacks. Resistance perks like Flak Jacket and Tactical Mask will come in great use to deter Assault Shield counterplay.

The Assault Shield allows the holder to more effectively make use of lethal equipment and CQC weaponry, as the shield can protect the user whilst setting up a position to strike, and with CQC weaponry, the holder can take advantage of the enemy's tendency to rush the holder in an attempt to strike from the side to force CQC combat and score surprising kills. Should one wish to use the Assault Shield in this manner, it's best to use Fast Hands since it will facilitate the enormous amount of weapon switching the user will do during the match. It should be noted that the Assault Shield's position will change disadvantageously when using most lethal or tactical equipment, leaving the user more prone to enemy fire.

The Assault Shield allows users to move at ninety percent of the base movement speed. This is a notable speed improvement from the Riot Shield in previous games, but it still makes the Assault Shield one of the heaviest weapons to carry in Black Ops 2 Multiplayer. It takes one second to raise the shield, and dropping the shield takes either 600 or 800 milliseconds depending on what weapon is being swapped to.

Camouflages are available for the Assault Shield, and are completed by doing the following actions:

The Assault Shield in first person 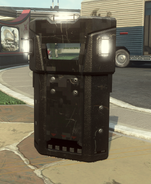 A player behind an Assault Shield

A planted Assault Shield bearing custom emblem and clan tag. Emblem and tag are also on the handle, visible to the user. Note the embedded front lights that are always on, but more visible in a dark environment.

Showing the placement of the clan tag and emblem when chosen

The Assualt Shield returns in Call of Duty: Strike Team, being called the "Riot Shield" like its counterpart fromthe Modern Warfare series.

The Assault Shield reappears in Call of Duty: Black Ops III, reusing the same model as the one used in Call of Duty: Black Ops II, though it is unavailable to the player. The Assault Shield can be seen at the beginning of Lotus Towers, wielded by the NRC Riot Troopers. It is also used by some enemies found in Combat Immersion, and can be seen in the multiplayer map Breach, resting next to the bar.

The Assault Shield found in Breach

An enemy using the Assault Shield in Combat Immersion