Call of Duty Wiki
Register
Don't have an account?
Sign In
Advertisement
in: Call of Duty: Advanced Warfare Sniper Rifles

The Atlas 20mm (referred to as THOR in the game files) is a shoulder-mounted, bullpup sniper rifle featured in Call of Duty: Advanced Warfare.

The weapon only appears in the mission "Utopia". After getting out of the sewer, when Ilona and Mitchell are informed by the anonymous helper that Atlas is rounding up civilians, two enemy snipers wielding the Atlas 20mm can be seen on a bridge. Their position is unreachable, but it is possible, though very hard, to obtain the weapon from one of them.

The most effective way to do so is to shoot a sniper in the head while he is in the middle of the bridge (using Overdrive is recommended for this), in which case he might drop the weapon from the top. It will reach the ground where Mitchell is, and the player can pick it up. Before shooting the sniper, it might be handy to kill all the soldiers on the ground, then go slightly forward to the buildings so that "checkpoint reached" appears on the screen. As such, the player can deal with the snipers without worrying of nearby enemies, and repeat the process as many times as desired if they couldn't get the weapon in the first attempts.

The Atlas 20mm has a low rate of fire for a sniper rifle. It fires in a semi-automatic configuration at 300 RPM, or five shots per second. While the Atlas 20mm doesn't heavily rely on follow-up shots, the Atlas 20mm can endanger the user somewhat if the user misses or needs another shot to kill an enemy.

The Atlas 20mm has a four-round magazine, and sixteen in reserve for a total starting ammo loadout of twenty rounds. This is a small loadout for a sniper rifle, but considering that the Atlas 20mm uses ammo efficiently, this is acceptable.

The Atlas 20mm has a limited set of attachments, as all optical modifying attachments bar the Ballistics CPU are restricted, while the Suppressor and Tracker are also absent. The Ballistics CPU is a very powerful attachment for the weapon, as it helps regulate the Atlas 20mm's ludicrous amount of idle sway. The effect is also intensified when using it on the Hypersonic, Interrupt, or 13 Twist variants, which also decrease idle sway speed.

The Stock is useful when the player wants to extensively aim with the Atlas 20mm in confined spaces. However, it is fairly useless otherwise.

The Parabolic Microphone reveals suppressed weapons fire when the mini map is visible and the Atlas 20mm is currently in use. The effect is of questionable value.

Extended Mags increases the Atlas 20mm's magazine capacity to 6 rounds, and boosts the starting ammo loadout to 30 rounds. If the player wastes ammo easily, this attachment is very useful.

The Atlas 20mm has some good variants to use. The 13 Twist and Interrupt both lessen the effect of idle sway by reducing sway speed by 17%. However, this comes at the cost of a lower fire rate of 285 RPM and 2% less movement speed for the respective variants.

The Carnage is a very powerful variant, as it increases the damage multiplier of belly shots. Also, the effect of idle sway is reduced by 17%, in a similar fashion to the 13 Twist and Interrupt variants. However, the magazine size is decreased by 1, resulting in 3 rounds in each magazine. This means that the player will reload frequently due to the small magazine size. However, equipping Extended Mags increases its magazine size back to 4 rounds, exactly the same amount of rounds as the default Atlas 20mm and most of its variants.

The Virtuosity and Royalty both reduce the sprint-out time by 30%, which is extremely useful when aggressively using the Atlas 20mm. Contrary to what the in-game stats say, they have no disadvantages whatsoever.

The Atlas 20mm is unlocked upon reaching round 24; it costs 3 upgrade points. Unlike its multiplayer counterpart, it can equip a Variable Zoom Scope. 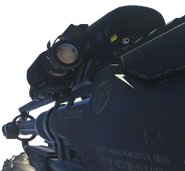 The Atlas 20mm in first person