"Unlike the government, we don't keep secrets of our capabilities. We don't sell policy, we sell power. We are a super power for hire."
— Jonathan Irons in Atlas

"I am a member of Atlas.
I serve Atlas and their clients.
I will always place Atlas' interests first.
I will not be defeated.
I will never be out-worked, out-classed, or out-gunned.
I stand ready to eliminate the enemies of Atlas.
I am Atlas.

Atlas Corporation is a private military corporation (PMC) featured in Call of Duty: Advanced Warfare. It was founded and led by CEO Jonathan Irons and is the largest, if not the most powerful private company in the world. Between the missions "Atlas" and the beginning of "Utopia", they are the main allies, but from the rest of "Utopia" to the end of the game, they are the main enemies.

Founded in February of 2035 in Colorado Springs[1] by Jonathan Irons, Atlas Corporation began its investments by purchasing the largest bioengineering research and development firm in the world in April 2037. By June 2039, Atlas had successfully developed and patented advanced exoskeletons for military use.[1]

Atlas continued to experience success in the early 2040s, successful field testing 3D printed weapons and munitions in December of 2041.[1] Atlas would ultimately expand internationally during this decade, opening up its first European headquarters in Belgium and Switzerland in February 2044 and patenting hover technology for weapons and vehicles by November 2047 - these would see fruition in a new generation of hover combat vehicles in 2053. In October 2045, Atlas would once again make corporate history, signing the largest ever weapons contract for the US military.[1]

Atlas Corporation soon became well known as the first to act after devastating and catastrophic events, assisting various agencies and governments as their first choice. For example, Atlas entered Baghdad after the Second Gulf War in January of 2047, doing more in five years to repair the city than what the U.S. government could do in 50 years.

May of 2050 marked the beginning of Atlas Corporation as the largest private military company on the planet.[1]

With freedom to act without governmental or congressional approval, the corporation quickly built itself up using its immense funds and vast results. It became the first such corporation to be admitted into the United Nations Security Council.

Atlas tanks firing during the battle of New Baghdad. 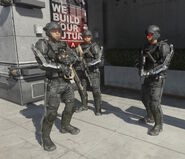 An Atlas stylized "A" is often used as a logo, such as this one seen at the facility in "Outbreak". 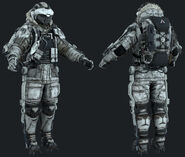 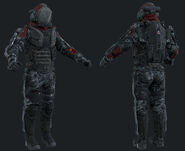 Concept art for an Atlas orbital platform by Scribble Pad Studios. The platform is mentioned in Crash but never seen in game.

Atlas personnel assist civilians harmed in the wake of a satellite crash.

Ether hands an injured child to a medic working for Atlas.

Atlas is hacked by Cordis Die

An Atlas Artic soldier in Call of Duty: Mobile having been named "Atlas - Crash".