Atlas Gorge is a multiplayer map featured in Call of Duty: Advanced Warfare. It is available as an add-on map to those that purchase the Limited or Pro edition of the game, as well as being included in the Season Pass [1] and was released as a separate DLC for $4.99. The map is available for free on all platforms since May 23, 2016. [2] The map is a re-envisioning of Call of Duty 4: Modern Warfare's Pipeline map. The map takes place on an oil pipeline below the Three Gorges Dam in Central China, which is now controlled by Atlas, and is based on the dam in the campaign mission "Throttle".

It is mostly divided into two by two buildings. Players can climb up ladders to access rooftops and catwalks offering good vantage points for people equipped with sniper rifles. At the North end, there are large pipes that players can use as hiding spots. At the East end has grassy fields and a building still under construction, it's probably good to equipped long range weaponry. At the South end, it has a few large oil reserves. In the warehouse, there is an entrance to the underground tunnel which leads to other places around the map.

Another overhead view of Atlas Gorge.

The Minigun in the map. 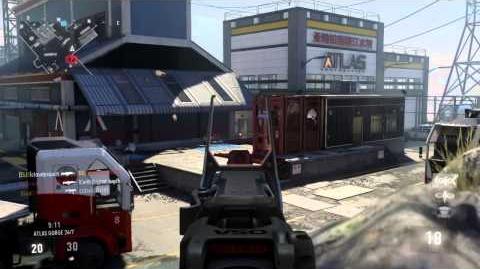