For the actual animal, see Dog.
For the other appearances of canine abilities, see Guard Dog and K9-Unit.

The dogs can be killed, but will continue to respawn until the 60 second cycle has ended. By default, dogs have 100 health. Dogs attack by lunging and biting at enemy players. In standard modes, players with more than 90 health points can survive up to two dog lunges before dying, but in Hardcore players die instantly even with Juggernaut. Killing a dog will give a player 3 XP depending on the game mode, but will not count as a kill or an assist. However, in Team Deathmatch and Free-for-All players score 3 and 2 points respectively, making it possible to actually win the game with fewer kills than would otherwise be necessary. For this reason, it can actually be detrimental to call in Dogs in these gametypes. Dogs rarely go into water, cannot climb ladders and never attack players in tanks.

A dog attacking in Call of Duty: World at War

Attack Dogs make a return in Call of Duty: Black Ops, and have been upgraded to an 11-killstreak reward in multiplayer.

Summoning the Attack Dogs is a painless and easy endeavour just like before, as when the killstreak is activated by the player, the Attack Dogs immediately begin to spawn in. The player does not need to guide the Attack Dogs, control them, or choose where to place them. German Shepherds (friendly) or Belgian Shepherd Malinois (enemy) will spawn for a set period of time after activation. Four dogs initially spawn, with four reserve dogs. As the first four are killed, they are replaced from the reserves, giving a maximum of eight dogs over the time the kill streak is active.

To compensate for the Attack Dogs requiring 11 kills to obtain, the dogs now kill in a single bite. Dogs are also attracted to gunfire, so a good thing to keep in mind would be to try and leave things quiet for a while. Ghost Pro does not make the player invisible to them, and the Attack Dogs run faster than a player can.

The most effective ways to counter dogs are to stay put in areas with limited points of entry. Elevated areas are fantastic at doing this, as it forces the dogs to funnel down one predictable path to try and attack the player. Highly elevated positions are sometimes impossible for dogs to access.

Even if the Dogs don't net a lot of kills as one might expect, the Dogs do a great job at distracting the enemy and limiting their movement. Players tend to hold back in defensive positions in order to deal with the Attack Dogs, so the Attack Dogs can be extremely helpful in advancing to certain positions and preventing the enemy from making an aggressive move towards key locations.

As the Attack Dogs are very simple to use and very effective, they are among the most popular and coveted of the high killstreaks, especially since it doesn't conflict with the Chopper Gunner, unlike the Attack Dogs' 11 killstreak counterpart, the Gunship. Attack Dogs often help to keep high killstreak aircraft up in the air, as the enemies are much more vulnerable when attempting to shoot it down. The kills that Attack Dogs net can also increase the effectiveness of these killstreaks by removing enemy players from entrenched positions that these killstreaks cannot target enemies from, and forcing the enemies to spawn in areas that make them much more vulnerable to aircraft. The Attack Dogs are also among the most coveted of items to obtain from a Care Package as a result of their effectiveness. 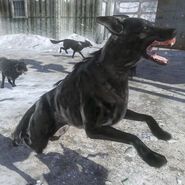 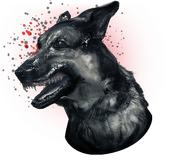 A Dog exiting the map Nuketown

"Spawns attack dogs that hunt down the enemy."
— Scorestreak description.

The Attack Dogs returns in Call of Duty: Black Ops II as the K9 Unit and being one a scorestreak.

The K9s are identical to their Black Ops counterpart except they now wear a vest, to fit with the future setting of the game. They don't however add any additional health to them. Killing a K9 in Black Ops II now rewards the player with 50 points per kill towards their scorestreak. Dogs will not attack any player that is in water. Hardcore does not reduce the dogs' health.

Attack Dogs are a cut scorestreak from Advanced Warfare. The streak would've been available on the map Instinct.[1]

A scorestreak known as Attack Dog is a cut scorestreak from Call of Duty: WWII. The streak is found in the files of the PC Open Beta version of the game.

"Deploy a pack of ferocious attack dogs who hunt down nearby enemies."
— In-game description

The Attack Dogs returns as in Call of Duty: Vanguard as a Killstreak. Once the player gets 10 kills without dying, they can call in the Attack Dogs. It spawns three dogs that kill enemies in one bite.

During the Festive Fervor Event, Attack Dogs had been visually changed to fit the christmas season with bells and antlers.