Attack of the Undead

Attack of the Undead is an event in Call of Duty: WWII, from May 29th, 2018 to June 26th, 2018[1]. The new event featured seven new weapons along with new camouflages and charms, a new community challenge, and the return of Captain Butcher.

The first game mode is the returning fan-favorite Infection, where one player will spawn as a Zombie and have to infect the other players to win.

The second game mode is Hordepoint. The mode is similar to Hardpoint, but in addition to enemy players, one must also have to deal with non-player Zombies.

Relic of the Undead

The third game mode is Relic of the Undead; in which the player must hold a Zombie Relic for as long as possible.

Seven new weapons were added added to the game along with new camouflages.

Gröesten Haus, the special bonus map from Nazi Zombies, appears as a special multiplayer map, originally being available only in Infected, Hordepoint, and Relic of the Undead. It now also appears in its own playlist selection, offering double XP for Soldier, Division and Weapon levels. The playlist rotates between Team Deathmatch, Domination, Kill Confirmed, and Hardpoint modes.

A New Community Challenge starts on May 29th and ended on June 26th, 2018. The challenge was featured across all platforms and special rewards could be unlocked for all players by killing zombies. 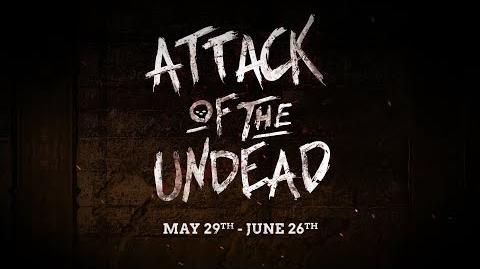