The Auger is a rotary light machine gun added to Call of Duty: Infinite Warfare on May 2, 2017.

The Auger is unlocked either through obtaining a variant through supply drops, instant access through the season pass, or by completing a challenge. The challenge consists of completing a total of 20 matches where the player landed at least 50 shots using LMGs.

The Auger's initial fire rate is moderately slow, but quickly ramps up to a fire rate comparable to the Mauler, albeit slightly slower. Unlike traditional Miniguns from previous installments, the Auger cannot be spooled up before firing by aiming down sights, thus forcing the player to go through the initial slow fire rate every time they stop shooting. Pre-firing on an enemy position or anticipating enemy movements can help the player to bypass this limitation and deal as much damage as possible in a short amount of time.

The Auger features an integral Reflex Sight with a circular red ring reticule by default. The reticule displays a decently sized cone of fire, but the sight may be cumbersome and obstructive to the player, and so a different optical attachment can be chosen if preferred. The Auger is sometimes wielded by bots and can be picked up.

During the third week of the Halloween Scream event, a limited edition Epic variant of the Auger titled the "Pumpkin Pummeler" became available for the duration of the third week of the event. This version of the Auger gives it the Epic Primed gun perk, which allows the Auger to fire without having to spool its barrel, allowing it to achieve its maximum fire rate immediately, but is given a slightly slower fire rate than the normal Auger to balance this. The weapon also comes with the Common Sharpshooter gun perk, as well as a special Halloween themed camouflage which cannot be changed. It also includes a unique skull reticle, which is identical to the one used for the Legendary M.2187 - Graveyard variant. Aiming at an enemy with this reticle will cause the eyes of the skull to light up.

The Auger was added to Zombies in Spaceland, Rave in the Redwoods, Shaolin Shuffle, Attack of the Radioactive Thing and The Beast From Beyond where it can be found in the Magic Wheel.

The Auger for its own is not so strong at all, but can take you until round 20/25. It is best used with one variant, specially the Fury, since it become a dual minigun. It gets a higher damage per bullet and more ammo, despite the scaled ammo is reduced when Pack-A-Punch. 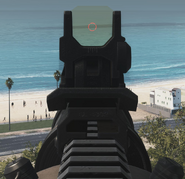 Aiming down the integrated reflex sight