For the combat version, see Tomahawk.

The Axe would have been a weapon in Call of Duty: Roman Wars, but it was however cancelled.

The Axe makes a brief appearance in Call of Duty: Black Ops II. It is only featured once on the campaign level "Time and Fate" during the part when Raul Menendez is playable. Near the beginning of the level, the player must go up a hill and through a small shack. The axe is inside of the shack, and the pick-up text "Use" appears when reaching it. The player can only use it before the PDF soldiers holding the five civilians captive notice them. If they pick it up, the axe will automatically be thrown to the left-most soldier. They cannot pick it up again after using it or being noticed.

In TranZit, at the Hunter's Cabin, there is an axe stuck into a stump outside the cabin. It is cosmetic though, and cannot be used by the player. It was also used by Nikolai Belinski to kill zombies in the intro cutscene of Origins.

"This will be useful."
— Rorke, after acquiring an axe.

A fire axe is used by Rorke to hack a Federation soldier to death in the mission "Legends Never Die". Rorke then discards the axe by dropping it in to the flood water.

On the map Fog from the Onslaught DLC pack, upon obtaining the Michael Myers Field Order reward, the player is given the weapon to use. It is a one-hit-kill, and victims' "souls" expel out of their bodies upon death. Melee actions with the axe are at an increased speed from the Combat Knife as seen in Multiplayer.

Third person view of the Axe

Attacking with the weapon

A more futuristic Axe, known as the Slash N' Burn, is usable in multiplayer and zombies. 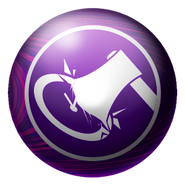 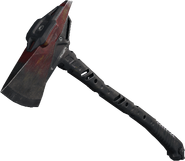 "A standard wood axe, perfect for making kindling out of your enemies."
— In-game description

On February 28th, 2017, the Axe was added as a melee weapon into multiplayer, with the base version along with the variants only available through Supply Drops.[1]

Unlike most weapons in the game, the Axe only has one variant, the Epic Headsman, which allows the player to throw the Axe and pick it up from the ground once thrown. 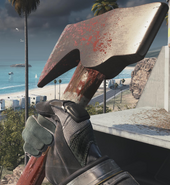 The Axe in first person

The Headsman variant about to be thrown

Melee
The Fire Axe was added to Call of Duty: WWII with the Attack of the Undead event. It is the primary weapon of the Infected in the titular mode.

The Axe returns in Call of Duty: Mobile. It was added as part of the Season 2 update.

Included in the Ronin Operator Bundle is the "No Masters" blueprint of the Combat Knife, designed instead as an axe with alternative animations and sounds. The similar "Tall Tale" blueprint is also available in the Lumbertactical bundle.