Sergeant Aziz was one of the Marines that went along with Hudson and Mason to the underwater base in the mission "Redemption", along with his Marine squad-mates, Sgt. Drew and Sgt. Maestas. Aziz however does not survive the attack on the underwater base, as he is killed shortly after he enters the first room. 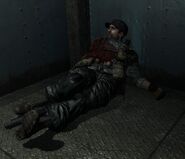