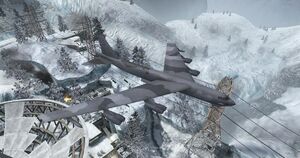 The B-52 Stratofortress is a carpet bomber featured in Call of Duty: Black Ops

In Call of Duty: Black Ops, the B-52 is used extensively by the USAF in Vietnam as a carpet bomber, where several can be seen at the end of the mission "S.O.G.", bombing the NVA below. In multiplayer, the aircraft drops the killstreak Rolling Thunder.

Retrieved from "https://callofduty.fandom.com/wiki/B-52_Stratofortress?oldid=1496290"
Community content is available under CC-BY-SA unless otherwise noted.