The Beretta 23R (also referred to as B2023R and the Beretta 93R in the game files) is a three-round burst handgun featured in Call of Duty: Black Ops II and Call of Duty: Strike Team.

The B23R can be selected in the customized loadout, and is also a part of the recommended loadout in "Achilles' Veil". It does not have any delay between bursts, unlike its multiplayer counterpart.

In the mission "Karma", if the player kills the guard who opens the weapons locker after searching for Chloe, he may drop a B23R with a semi-automatic firing function. This variant also has a different firing sound, which is noticeably lower than the sound of other firearms in the game.

The B23R is the third pistol to be unlocked at level 19. It is a three-round burst pistol with a high rate of fire and moderate recoil, as well as a smaller burst delay compared to other guns. It will kill in one burst at close range and two at a distance, assuming all bullets hit. Like the M8A1, it has no extra headshot multiplier, meaning it is recommended to aim at center mass to make the bullets count. Due to its high damage per second potential as well as fast aim down sight time, it is very effective in close quarters, though it loses effectiveness at range where the damage dropoff combined with the recoil and low magazine size offset its fire rate. It is a popular sidearm in Hardcore game modes as it only needs up to two bullets to kill, making it excellent even for long range combat. Compared to the KAP-40, the B23R has lower recoil and higher damage per second, should the player kill with one burst, and burst-fire can control ammo consumption. However, KAP-40 is fully automatic, making it more suitable for players with worse aim. Due to its close-quarters effectiveness and early unlock, it is a commonly seen sidearm.

The B23R is the first weapon tier on Gun Game. It is equipped with the Tactical Knife attachment.

The B23R makes an appearance in every Zombies map excluding Bus Depot, Town, and Farm. In Nuketown Zombies, it is inside the green house. In TranZit, it is found on the ceiling of the Bus. In Die Rise, it is in the Trample Steam room. In Mob of the Dead, costing only 900 points instead of the usual 1000, it is found opposite one of the heads of Cerberus in the 'Broadway' cell block. In Buried, it is located on the right side of the gunsmith's wall. And in Origins, it is found in the trench between 115 generators 1 and 3 and costs 750. It retains its 15-round magazine capacity, with 105 in reserve (120 rounds overall). It is fairly powerful, particularly on lower rounds. It will run out of ammo very quickly past round 10, making constant ammo stops a necessity. However, it remains powerful until around round 20 and above, and is especially effective at the torso to head. Because of its power for a good price, this gun is very useful if a player joins in the middle of a game as they can buy it immediately and still be able to do some damage if access to the Mystery Box is not available. In Origins, the B23R can be found in the Mystery Box with the Extended Clip attachment, with 24 rounds instead of 15, and 168 in reserve instead of 105.

When Pack-a-Punched, it becomes the B34R. It will become fully-automatic with 20-rounds per magazine and 180 rounds in reserve. It can be Pack-a-Punched multiple times like other weapons and can attain the Fast Mag attachment. However, it's still not a good weapon to use on high rounds, because it has lower damage and runs out of ammo extremely fast. If the extended mags variant is upgraded, it gains a magazine that stores up to 30 rounds and 270 reserve ammunition but is not recommended as other weapons are much stronger but it does make a good backup weapon when downed.

The B23R in first person 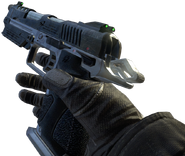 Render of the B23R's model
Add a photo to this gallery

The B23R appears in Call of Duty: Strike Team as the Beretta 23R. It has unlimited ammunition in the campaign and Survival Mode.

The Beretta 23R in first person

Retrieved from "https://callofduty.fandom.com/wiki/B23R?oldid=2465992"
Community content is available under CC-BY-SA unless otherwise noted.