The BOS14 is a fully-automatic bullpup assault rifle added to Call of Duty: Modern Warfare Remastered on the May 2nd, 2017 update as a part of the Operation Lion Strike collection. It can be unlocked by completing the BOS14 bounty, at which point it becomes available for use at all levels and is exclusive to Multiplayer.

With a fresh magazine in the weapon, the BOS14's first five bullets deal increased damage on par with the likes of the AK47 and the M16, killing in 3-4 shots. The remaining 30 rounds, however, deal lower damage on the level of the M4 and the G36C, killing in 4-5 shots. Stopping Power changes this to 2-3 shots and 4 shots at all ranges, respectively; Stopping Power is still beneficial to the BOS14, but it is not as beneficial as it is toward most other assault rifles. The advantage of the more powerful bullets can be maintained if the user reloads often between engagements. The first five shots are unusual in that they don't suffer the range penalty of the remaining bullets in each magazine.

The BOS14 does not suffer from the negative effects of the silencer in most circumstances. The only exception is when using the BOS14 without Stopping Power and without the bonus damage, where the three shot kill range is shorter.

The BOS14 benefits significantly from reload cancelling, shaving off over about a second before the gun is ready to fire again.

The BOS14 in first-person 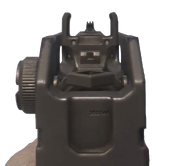