BRAAAINS... is a secret weapon in Zombies on Call of Duty: World at War, Call of Duty: Black Ops, but is playable without console commands in the Call of Duty: Black Ops II Zombies game mode "Turned". It is only accessible on the PC by typing "give zombie_melee" in the console or by simply inputting "give all" and cycling through the weapons (after using devmap in console). On the consoles, hacking devices must be used. When the player uses it, the characters' hands reach out and hit enemies just like the zombies.

Even though BRAAAINS... is strong against the player (as it requires two hits without the Juggernog perk to be downed), it is actually fairly weak against zombies as it requires several hits to kill a zombie, even on the first rounds, doing four times less damage than the standard Knife.

When attacking by pressing the 'fire' or 'melee' button, the character will groan and yell like the zombies while swiping at anything in front of him. Each attack does only 50 points of damage, making it one of the weakest weapons in Zombies.

When dropped (with console commands), BRAAAINS... simply disappears. No pick-up icon appears and no world model is dropped. This is most likely the case due to the fact that it was not meant to be an in-game weapon and therefore has no game item.

BRAAAINS... can be accessed through aforementioned way; however it is the only game where it can actually be used through console commands. The zombies use this "weapon". Also, the player's character will complain about the lack of ammo simply because 'BRAAAINS...' has no set ammo value.

BRAAAINS... is not available for player to use, and it cannot be acquired through "give zombie_melee" nor "give all"; however zombies "use" it as their only weapon.

BRAAAINS... appears in downloadable content pack Revolution and Vengeance, in the game mode Turned as the only weapon available to the zombies. The arms can be controlled separately as there are different buttons to control the left and the right arm (the aim and fire buttons, respectively). BRAAAINS... will kill the human in one hit, similar to the Knife in multiplayer.

BRAAAINS... as seen in the Verrückt trailer. 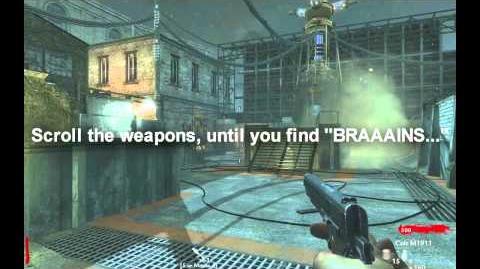