"Back on the Grid" is the sixth mission of Call of Duty: Modern Warfare 3. The player takes control of Yuri as he, Price, and Soap go in search for cargo belonging to Makarov.

The mission starts with Yuri, Soap and Price surfacing from a river in Sierra Leone. After readying their weapons, the three move towards the village, where Makarov's factories are located. As they head towards a bridge, militia vehicles approach. The trio hide under the bridge, and as a militia member approaches the river, Soap uses his knife to take the soldier out. Moving towards the village, the team are stopped by an enemy patrol, which they take out stealthily. Moving into the village, the three witness a civilian having gasoline poured on him and set on fire, however he can be saved, depending on the player's actions.

Moving past this, the three come across a road. As vehicles drive down it, militia soldiers execute civilians in the ruins of a burnt out hut. They sneak past the soldiers and start to advance along the side of the road, but are forced to hide when more vehicles drive past. Once the vehicles have passed, the three move into a shed and wait for another patrol past. Moving out of the shed, they spot two enemy sentries on a bridge, and quickly take them out.

Moving into the village, Price takes out an enemy patrolling and Yuri is ordered to provide overwatch. After taking out the guard in the tower, Yuri uses his sniper rifle to help eliminate targets ahead and behind Price and Soap. After Price and Soap have breached the factory at the end of the street, they are compromised. Yuri quickly leaves the tower and fights through militia to reach Price and Soap.

The three reach a house with ladders inside and ascend, they reach the top of the ladder, as militia forces converge on their position. A technical appears but Yuri kills the gunner, as more and more militia appear. Price orders Yuri on the Browning 50. Cal mounted on the back of the technical. Using the weapon, Yuri holds off multiple waves of enemies, including other Technicals. However, a mortar shell hits the team, knocking Yuri off and sending him tumbling to the ground.

Soap runs back for Yuri and the two meet up with Price and start to escape through the village, dodging mortar shells. However, when Yuri attempts to jump from one rooftop onto another, he falls through the weak roof of one and is confronted by a machete-wielding militia member. Yuri quickly regroups with the other two and locate the enemy mortar. Spotting the operators, Yuri fires and kills them, ending the bombardment of mortars. Hearing of a large force on their way, Price orders Yuri to man the mortar in the tower. Yuri destroys many targets before Price tells him to stop, as he has bought them enough time.

The three retreat from the tower and advance through a large drain pipe. Emerging from the tunnel, they are confronted by a factory full of militia. After clearing them out, they make a right and are ambushed by waiting hostiles on the street and in buildings. The three clear the whole street before moving into the ruins of a house, from which the church where the cargo is being held is visible.

As the three engage enemies streaming in from surrounding buildings, the transport helicopter is spotted. Seeing that they are running out of time, the team advance quickly through the market place and towards the church. As Yuri nears the large entrance, the doors are flung open, revealing a large group of militia and hyenas. The three take out the church's defenders and prepare for breaching. As Yuri kicks down the door, a hyena attacks him. Holding it off with his left hand, he pulls out a pistol and kills the two guards in front of the helicopter and finishes off the hyena. Unfortunately, the helicopter takes off with its precious cargo still on board. 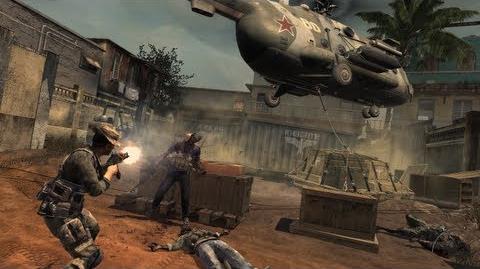 14. The first intel is located in a corner of the factory that Price and Soap search if the player manages to take out the seven enemies without being spotted while on overwatch.

15. The second intel is in a house on the left of the first street the player goes down.

16. The third and final intel piece is sitting on a table at the back of the church. 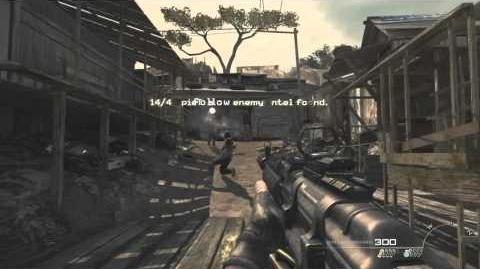 Main article: Back on the Grid/Transcript

A Photo of Lev Kravchenko can be seen on the upper left.

Yuri kills the hyena that knocks him down at the end of the mission.

Price and Soap trying to stop the helicopter.

Concept art.
Add a photo to this gallery

Retrieved from "https://callofduty.fandom.com/wiki/Back_on_the_Grid?oldid=2524445"
Community content is available under CC-BY-SA unless otherwise noted.