"Bag and Drag" is the eleventh mission of Call of Duty: Modern Warfare 3. It involves Frost along with other Delta Force operatives in Paris with GIGN chasing down Volk, Makarov's bomb maker.

Price phones Sandman, despite the fact that there's a "capture order on [his] head," and convinces him to join the queue. While Price is heading to Makarov's European Headquarters, Team Metal would team up with GIGN to find and capture Volk before he escapes.

Metal Team, on board a Little Bird helicopter flying through Paris, drops off Sandman, Grinch and Frost on a rooftop. The entire assembly is wearing gas masks, as the surrounding area is still contaminated from the gas attacks. The three make their way through a damaged house containing dead civilians, and to the edge of the building where a big hole provides a morbid view of the streets below. Sandman clears a piece of debris out of the way, and the team slowly make their way along a narrow ledge on the outside of the building.

Reaching the other side of the building, Sandman contacts Sabre, the GIGN commander in the area to be informed that the French forces are taking heavy casualties. The Delta team quickens pace and descends a staircase to find Russian soldiers garrisoned in a book-store on the opposite side of the street that spots them. The Delta operatives rush down the stairs, and Frost and Sandman assault the store. Engaging enemies on both floors, they clear it of all hostiles, and stack up against a metal door at the back of the shop.

Grinch opens the door, and they find a group of Russian soldiers with their backs on the group. However, no sooner do they see the hostiles, that the enemy forces are shot by GIGN forces. The Delta operatives move inside a restaurant where many GIGN men are wounded or dead. Sandman meets up with Sabre, who tells him that Volk is hiding in the catacombs.

The American and French forces group together and head out of the restaurant. As they leave the dining area, they come under heavy fire from Russian soldiers in the courtyard, and RPG fire from on top of a staircase. The joint force clears out of the courtyard and move up the stairs, but when they reach the top, a Russian column of armor drives down the street next to them. To avoid the enemy vehicles, Sabre leads the Delta and GIGN operatives inside a burning building. As they move up to the windows of the building, Russian hostiles appear in the adjacent building. Once those enemies have been dispatched, the joint force jumps down through a hole in the floor, and emerge on a street. Reaching the end of the street, they are faced by a large enemy Russian force down a staircase. Sandman requests fire support from Warhammer, and Frost marks the enemy targets with a smoke grenade. The gunship fires and wipes out the large enemy presence.

The allied forces move down the staircase and approach a plaza. However on the plaza is a Russian armored vehicle and enemy infantry rappelling in from helicopters. Frost throws another smoke marker down, and Warhammer destroys all of the targets. The joint force moves onto the plaza as the gunship returns to base for fuel. In a little side street nearby, Sabre locates a manhole, which is the entrance to the catacombs. The two forces climb down into the catacombs, and once down there, Sandman checks for toxins. After getting a negative reading, the group remove their gas masks. Sabre leads the way with his helmet mounted flash light, and Sandman marks their route with flares so that friendlies can follow their route. The team reach a door, and Faucon breaks it open with a crowbar. They duck under a bar and take a left and end up in a tomb, filled with hundreds of skulls and skeletons. As Sabre moves down a corridor, a Russian soldier slams a gate into him, but Sabre manages to kill him. The team then kills another Russian at the end of the corridor.

As Frost turns around a corner, a flashbang is thrown at him. Frost is blinded, and after recovering sees Volk escaping. The French and American forces clear the room of hostiles and give chase. They run up a metal staircase into a sewer, where more hostiles confront them. After killing them, the joint force climb a ladder and run through a building until they can see Volk driving off in a gray car. Sabre and the other GIGN operatives cover the Delta team as they commandeer a blue van. As enemy helicopters drop more infantry, Grinch takes the wheel, Frost climbs in the passenger seat, and Sandman gets in the back of the van. As the van speeds off, Frost opens fire on Russian hostiles in the streets. Grinch sees two enemy vehicles and starts to drive faster. Going in between the vehicle, the corpse of a Russian lands on the front of the van and falls off. Sandman orders Frost into the back of the van, who kicks open the doors to reveal that they are being pursued by a tank. As Grinch attempts to escape the tank and drives straight into a store.

While stationary, a hostile attempts to climb into the van, but is killed by Sandman. Grinch gets the van moving again, and an enemy helicopter starts to pursue them. To get the van out of the line of fire, Grinch makes a sharp turn, which takes them into a large building. Above them, the helicopter tries to destroy the van by firing through the glass ceiling. Emerging from the building, Grinch spots Volk's car, and Frost returns to the passenger seat. Grinch speeds up and Frost shoots out the car's rear tires. Volk's car starts to skid rapidly out of control, hitting buildings until it turns too sharply to the right. The van rams into the car, pushing it along the street, and Russian soldiers escorting Volk draw their weapons, but Frost kills them. The van pushes the car through a fence into a dumpster, trapping Volk. The Delta team exit the van and Sandman beats Volk before grabbing and subduing him while Grinch requests an extraction.

Delta Force meets up with Sabre, the leader of the GIGN team.

Sandman, Frost and Faucon in the graphic cutscene at the start of the catacombs area.

Sabre and Faucon in the catacombs. 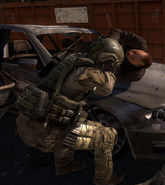 Sandman dragging Volk out of his totalled escape vehicle.

Grinch hits Volk's car.
Add a photo to this gallery 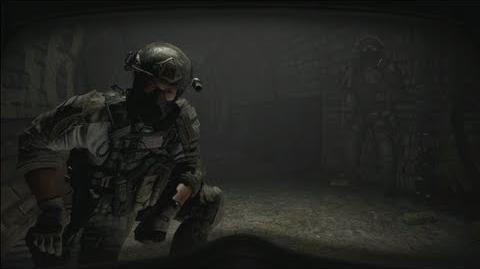 26. Head into the bookstore and up to the second floor. The intel is sitting on a window sill.

27. Once done with the bookstore, head through a destroyed restaurant and look for the Cafe de Paris. The intel is sitting on a small table toward the back of the outside cafe seating area.

28. In the control room inside the sewers, where the player gets flashbanged and have to chase Volk, find the intel on top of a power generator. 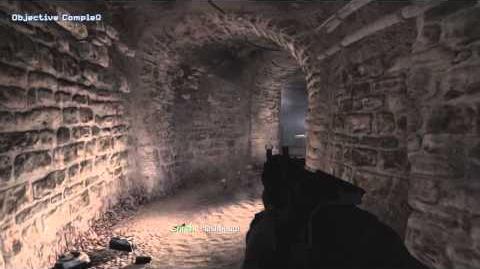 "Sami" written on the wall.

The girl holding the teddy bear and the hammer.

The drawing of a girl and the frog graffiti.
Add a photo to this gallery
Retrieved from "https://callofduty.fandom.com/wiki/Bag_and_Drag?oldid=2546468"
Community content is available under CC-BY-SA unless otherwise noted.