Bakaara (referred to as Mogadishu in pre-release media) is a multiplayer map in Call of Duty: Modern Warfare 3.

Bakaara is one of the larger maps in Call of Duty: Modern Warfare 3. It is set in an urban environment of the shore with many buildings that can be accessed. There are multiple streets and back ways that contain medium to long lines of sight. The streets have many crashed vehicles on them, offering decent cover. The two main spawns are at the top of the hill (at a gentle slope) that this map is set on, and at the docks on the other side of the map. Near the middle of the map is a courtyard with a crashed Black Hawk which has a mounted minigun that can be used to hold down that area of the map, but is wide open to enemy fire. Tactically, the minigun is risky. It offers a considerably decent field of fire on the main approach, but one can easily be killed without team support. The minigun is not present in Infected, however, for balance reasons.

In Survival Mode, Bakaara is a Tier 4 map and has the difficulty of Insane. The players start with the M16A4 with Red Dot Sight, the Five Seven, and 250 Armor, but no Self Revive, Flash Grenades or Frag Grenades. The hostiles include Bomb Squads, Chemical Agents, Claymore Experts, Choppers, and Armored Juggernauts. The minigun is unavailable in Survival Mode.

The crashed Black Hawk in the middle of the map.

The minigun on the downed Black Hawk. 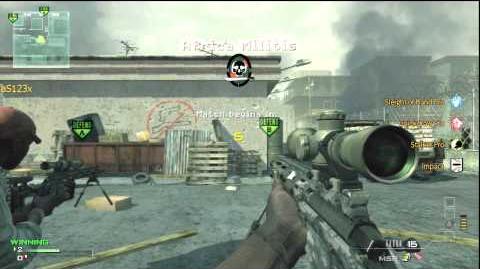 MW3- Search And Destroy - 7-2 (Gameplay)
Gameplay in Search and Destroy.