"Bolt-action sniper rifle. Deadly from the chest up, with faster handling speeds."
— Description.

The Ballista is unlocked at the start of "Fallen Angel". It can also be found in "Cordis Die".

The Ballista is the sniper rifle with the fastest scope-in time at 0.35 seconds (versus the 0.40 of the other rifles). The Ballista is also the only sniper rifle to use the iron sights, through an attachment. Being a bolt-action sniper rifle, it is most comparable to the DSR 50, but trades off lower damage and multipliers for a faster fire rate, slightly faster aim down sights time, faster movement when scoped (44% as opposed to 40%), a minutely faster movement speed (96% as opposed to the other sniper rifles' 95%), lower sway, and two more rounds in the magazine. Unlike the other sniper rifles, however, crouching or going prone will not decrease sway.

The damage multipliers of this weapon allow for a one-hit-kill anywhere from the head and shoulders down to the upper and middle torso. The suppressor is a viable attachment if the player prefers stealth as it will give the player more silent shots and less muzzle flash (however, the bullet trail is still present), in addition to not showing up on enemy radar when firing, with the cost of slightly lower damage multipliers, meaning the lower arms and middle torso are no longer one-hit-kill areas.

The Iron Sights attachment offers a choice for those who enjoy an aggressive role in sniping, as it is far more suited to close-quarters gameplay than the scoped counterpart. There is very little sway with this option, and even if taking a long shot cannot be avoided the player keeps his ability to hold his breath whilst aiming, for more accurate fire.

A Ballista with the Iron Sight attachment appears in the Zombies map Origins available off the wall for 500 points or can be dug up with a Shovel. It performs similarly to the Kar98k in that it is relatively effective on early rounds, but on later rounds the player will need to score a headshot to kill a Zombie. It is a one-hit-kill by headshot up until and including Round 6. However, during Round 6, zombies will walk around headless for a short duration after being shot and will continue to chase the player. When Pack-a-Punched it becomes the Infused Arbalest. It comes equipped with a 10-round magazine, more reserve ammo, and an ACOG scope attachment, although it can be Pack-a-Punched again to remove the ACOG scope and replace it with Iron Sights. In this upgraded form the Ballista is much more effective, remaining a one-shot headshot kill until approximately round 30, even without Double Tap II. 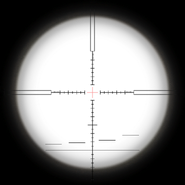 Iron Sights of the Ballista. 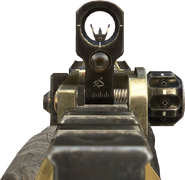 The Infused Arbalest in first person.

The Ballista in Call of Duty: Strike Team.
Add a photo to this gallery

401px
Retrieved from "https://callofduty.fandom.com/wiki/Ballista?oldid=2495552"
Community content is available under CC-BY-SA unless otherwise noted.