The Ballista EM3 is a unique weapon that can only be acquired via accessing the armory room in Operation D-Con. Once scanned into the player's loadout system, it will be available for use as a secondary heavy weapon.

Due to its one-shot/one kill nature and high penetration power, the Ballista EM3 is highly useful against lined-up groups of enemies, both humans and robots. Along with the P-LAW and the F-SpAr Torch, the Ballista EM3 is one of the few weapons in the campaign capable of completely gibbing human enemies.

The Ballista EM3 is available as a Payload for Phantom that is unlocked at level 36. It is a powerful four-shot sniper rifle, yielding an instant one-hit kill against most opponents. The weapon's iron sights form a centered outline of the target, similar to the Smart Shot optical sight. Ideally, this is not the best weapon to use at close range, but at long range at the hands of a marksman the weapon is extremely deadly. It is advised to be sure to always wait for the enemies to be fully targeted by it's custom sight before firing, as it will always end up being a one shot kill. Due to the nature of its penetration abilities, it is fairly easy to get collaterals or surface penetration kills with this weapon, far more so than any other weapon in the game. The custom Smart Shot sight of the Ballista EM3 features its own custom blue Tri Dot reticle.

The Ballista EM3 is obtained by activating the Getting Railed Fate Card. It works the same way and can kill several zombies with one shot as well as easily slaying round bosses with almost no effort. It is not well adivised to use in later stages of the game due to the fact that you need some time to aim, but the weapon deals a very high amount of damage.

The Ballista EM3 in first person. 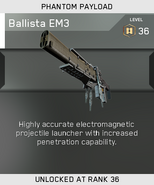 The Ballista EM3 being unlocked in multiplayer.