"Be a team player, throw down some Ballistic Vests for your crew."
— In-game intel.

Ballistic Vests is a five point Support Strike Chain reward which appears in Call of Duty: Modern Warfare 3 and Call of Duty: Ghosts.

Ballistic Vests are contained in a duffel bag which the player deploys with the "fire" button. Teammates can then take vests from the duffel bag.

The Ballistics Vests adds 50 health to the player, allowing them to survive longer. If enough damage is taken, the vest will be destroyed, reverting the player back to 100 maximum health, so caution should be taken even with the vest. When damaging a player wearing a vest, a ballistic vest icon will appear under the hitmarker.

Ballistic Vests are often favored in Hardcore due to the lack of health. Players in Hardcore usually get used to putting one or two rounds into an opponent due to the low health. However, the vest will give the wearer extra time to either find cover or to fire back.

Additionally, this is the only killstreak that cannot be rendered useless by an enemy EMP, due to the simple fact that it does not run on electricity. Becuase of the brown colour of the bag and it's small size, it can be easily hidden in a corner and rendered almost impossible to be found by the enemy team.

The enemy team can destroy the Ballistic Vests, and even during Hardcore games it is somewhat less effective due to the maximum weapon damage this mode features. It can quickly be destroyed with a devastating weapon, such as explosives, shotgun or sniper rifle. Killstreaks can also eat into the extra protection it offers.

The Ballistic Vests return in Call of Duty: Ghosts as an 8 pointstreak in the Support Strike Chain. It adds a separate 150HP armor to the user that will protect them from bullets (to the body), dogs (it takes three dog attacks to kill a player equipped with Ballistic Vests) and explosives. However, it will be completely ignored by armor piercing rounds, fall damage (unless the player is using the Resilience perk), knives, hits with the Riot Shield, and headshots.

Heads Up Display when having a Ballistic Vest equipped.

Ballisitic vests as they appear on the ground. 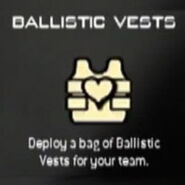 A killstreak icon for the Ballistic Vests.

The Ballistic Vests Bag in Ghosts.

Shooting an enemy equipped with Ballistic Vests (notice the yellow icon & icon next to enemy's name. 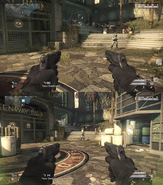 The difference of having a Ballistic Vest in first-person (notice the greenish-hue on the bottom corners of the HUD).
Community content is available under CC-BY-SA unless otherwise noted.
Advertisement