The Banshee is a pump-action sonic energy shotgun featured in Call of Duty: Infinite Warfare.

Unlike its multiplayer varaint, the Banshee actively deafens and disorients enemies, weakening and killing them with sonic pulses as opposed to directly impacting them. This is evident in the weapon's single-player design, which accomodates a drum-like muzzle to reciprocate sonic waves. This design bears strong resemblance of its multiplayer epic variant, the "Siren".

When all side missions are completed, the Banshee unlocks the C6 Stun upgrade, which increases the deafening effect of the weapon to stun C6 units.

The Banshee is unlocked at level 11.

The Banshee is a wall weapon for almost every map. It can be bought for 750 points and deals a good amount of damage for a wall weapon. When upgraded twice, the weapon can easily kill until 28/29. The Siren variant provides more range and gives a bonus stun effect for your shots while maitaining the reliable damage whilst the Doppler variant provides a more strong option for combat, transforming it into a 3 round burst shotgun while sacrificing some range per shot. When playing it at Spaceland, a Banshee powered by the X-Quisite becomes a much more reliable weapon than most of the wall buys.

The Banshee in first person 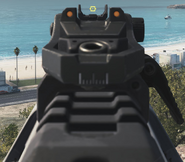 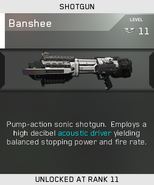 The Banshee being unlocked in multiplayer