Barkov's Forces is a faction featured in Call of Duty: Modern Warfare and one of the main antagonistic factions in the campaign. It is a rogue division-sized unit of the Russian Ground Forces led by General Roman Barkov. Barkov's personal armed forces consists of Russian soldiers and mercenaries who carry out his brutal agenda to oppress Urzikstan. After Barkov's death, the unit was presumed to be dissolved and its members were captured and tried for their actions. However, there were still remnants of Barkov's men left in Urzikstan after Barkov's death who had avoided capture and continued Barkov's unfinished business by joining up with the Allegiance. Some others who are believed to have defected and had started working for Victor Zakhaev, began supplying arms and equipment to Al-Qatala forces, and currently serve under Zakhaev's Ultranationalist army. 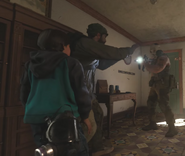 J-12, possibly the only known heavyweight soldier of Barkov in Hometown

A Russian soldier getting killed by Farah in Embedded

Russian Pilot with a PP19 Bizon in Embedded

Price and Hadir fighting a Spetsnaz soldier in Going Dark

Barkov's remaining soldiers in the train station at Verdansk