For another variant, see Rytec AMR.

The Barrett .50cal is first seen in "F.N.G" on the weapons rack, along with all the other weapons in-game and is unusable.

It is then seen again in "One Shot, One Kill", being used by Lieutenant Price who was accompanied by Captain MacMillan in an attempt to assassinate Imran Zakhaev. This Barrett .50cal is mounted on a bipod and cannot be picked up. It has a variable zoom feature, allowing the player to zero in on a target, using movement controls (on the Wii version the weapon is controlled with the control stick/nunchuck rather than the remote), since the player remains in prone position when wielding it. It also has unlimited ammo, very little recoil, and no scope sway. This is the only time that it is usable in the campaign.

In multiplayer, the Barrett .50cal is unlocked at level 49 and is the last sniper rifle unlocked by normal means. Like all sniper rifles, it can use an ACOG Scope attachment. It is tied with the Dragunov, S-Tac Aggressor and R700 without Stopping Power, able to kill in one hit if shooting in the chest, neck, or head. With Stopping Power, its one hit kill range expands to include the stomach. It has the highest penetration of any weapon in multiplayer.

However, the Barrett .50cal also has a few disadvantages. It has very high recoil, but it always travels in the same direction, and the reticle quickly resets back on the initial point of aim. A good way to compensate for its high recoil is to treat it as a bolt-action rifle, and only fire when it has returned to its original position.

Another disadvantage is the fact that the rifle itself is so long it often protrudes out of cover, giving the player's position away. Its firing sound is loud and distinctive and can give away the user's position in Hardcore. Because of its very high damage, firing rapidly with this gun is not usually necessary, although it can be used as a last-resort in close quarters. The Barrett .50cal has an unusually high fire cap of 1200 RPM. Unlike pistols, which had their rate of fire nerfed in Call of Duty: Modern Warfare Remastered, the Barrett .50cal retains this rate of fire in the remastered version.

The Barrett .50cal is a relatively sluggish weapon for a sniper rifle, with poor raise/drop times and a slow reload speed with poor reload cancelling.

The Barrett .50cal appears in Old School Mode with 20 rounds in the magazine and 10 rounds of reserve ammunition.

The Barrett .50cal in first-person

The Barrett .50cal used in "One Shot, One Kill"

Another one in the armory 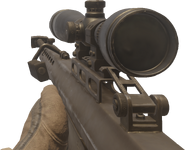 The Barrett .50cal in first person 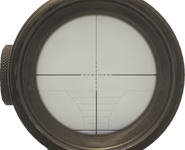 The Barrett .50cal is relatively unchanged from Call of Duty 4: Modern Warfare, with the exceptions of new attachments, a redesigned scope, widened muzzle brake, and lack of a front iron sight. The only notable change from Call of Duty 4 depiction of the Barret found in the missions, "Of Their Own Accord" (although it is mounted with a thermal scope and variable zoom) and "Loose Ends" (as a portable variant). The only major differences from campaign to multiplayer are that the Barrett .50cal has a lower, more realistic level of recoil and a fairly low firecap in the campaign.

Exclusive to the remastered version, the Barrett .50cal plays an important role in the achievement Clown in Training, as it is required to snipe all of the hidden clowns in S.S.D.D..

The Barrett .50cal is unlocked at Level 3 as part of the "Scout Sniper" default class.

The Barrett .50cal is most praised for its ability to deliver one hit kills with a high rate of fire, though it is capable of firing faster than its sight can settle. Firing too quickly makes the Barrett .50cal difficult to use, due to the high recoil. However, the Barrett .50cal does have a recoil limit. This problem is easily mitigated by simply not pressing the trigger as quickly and only firing when the recoil has settled, giving this weapon the same accuracy and rate of fire as the Intervention. This requires great concentration, as inexperienced players are tempted to take advantage of the Barrett's semi-automatic capability into firing too soon.

Nonetheless, the ability to fire so fast can be an advantage in close quarters when there is no time to switch to a secondary and the player is forced to fire their sniper rifle from the hip. This gives the Barrett a big advantage over the Intervention, the latter being much more difficult to use in close quarters. The only disadvantage of the Barrett, aside from the recoil (which can be eliminated by patience), is the long reload time but it makes up for that with a larger magazine.

With Stopping Power, the weapon kills in one hit to the head, neck, chest and stomach. Without it, it loses the one-hit-kill to the stomach. Targets will require multiple hits when Painkiller, Last Stand or Final Stand is used. In Hardcore it is a one-hit-kill anywhere on the body, even when used with a silencer.

One flaw of the Barrett is that its recoil kicks the gun up and to the right so much that the shooter momentarily loses sight of their target. Since the ACOG Scope zooms in less when looking down the sight, it is easier to follow an enemy after firing with it than with a standard Sniper Scope, but in many situations the decreased zoom and inability to steady the scope makes it less than practical.

The Barrett .50cal, as it appears in Modern Warfare 2

The Mr. Yuk sticker, as seen on the Barrett .50cal

The Barrett .50cal in third person 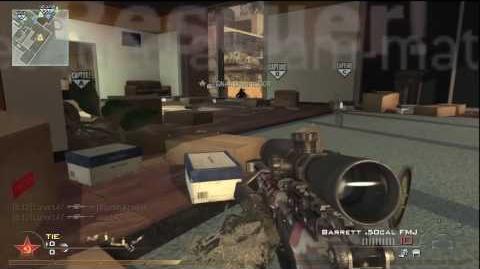 "The Barrett .50cal provides the second fastest fire rate in its class. Along with a rapid re-center speed and a 10-round magazine, it's possible to tag multiple targets before reloading. Note that the recoil kicks hard outside of prone, so find a good perch and remain low for the best performance."
— Call of Duty: Elite description

The Barrett .50cal briefly appears in the mission "Blood Brothers" during the loading cutscene, when Yuri and Soap set up in their sniper nest. However, it is not used and is not seen again. It is replaced by the RSASS during the actual mission.

The Barrett .50cal is available in level 2, through the Scout Sniper Default Class and is unlocked for Create-a-Class at level 4. It is very much like the variant in Call of Duty: Modern Warfare 2, in which it is a one-hit-kill to the head, neck, chest and stomach. One change to the Barrett from previous titles is that it reduces the player's movement speed considerably; players carrying it will have the same movement speed of a Light Machine Gun. Because of this, the Speed Proficiency is recommended. Also, its recoil and sway are lower when prone or crouching.

It is a good idea to pair Sleight of Hand with this as it can greatly reduce the reloading time. However the 10 round magazine, semi-automatic firing mode, and large potential for a one-shot kill means the said perk is not mandatory.

It is also used in the Infected loadout "Knife vs Barrett", where it comes equipped with the Attachments with a Heartbeat Sensor and Extended Mags.

The Barrett .50cal is available for both Survival and Mission modes.

The Barrett .50cal is used by the player providing overwatch in the Mission Mode challenge Invisible Threat. Several Barretts can also be found on the roof of the Stock Exchange in Flood the Market, to pick off enemies on the adjacent rooftops.

The Barrett .50cal is unlocked at level 49 in Survival Mode, being the last sniper rifle to be unlocked. It costs $2000 from the Weapons Armory. It is one hit kill up until heavy troops armed with an AK-47 appear, so an automatic weapon should be switched out for the Barrett .50cal after the heavy troops appear. However, due to its high damage and firecap combined, if equipped with an ACOG Scope it is a very deadly battle rifle for a little longer than what's recommended of it. 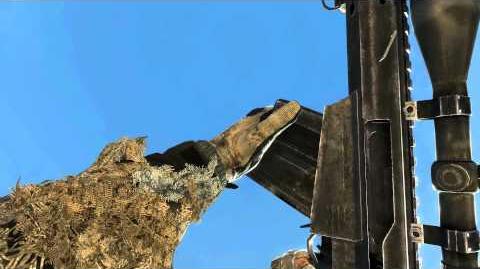 The Barrett .50cal appears in Call of Duty: Black Ops II, now called Barrett M82A1. It is part of the recommended loadout for the mission "Time and Fate", and scriptly used in the mission "Suffer With Me" where it is used by Frank Woods to shoot Mason. It can be unlocked for use in any mission once "Time and Fate" has been reached.

"First manufactured towards the end of the 20th century, but a fine piece of weaponry by any measures."
— Marlton Johnson, when obtaining the M82A1 from the Mystery Box in Die Rise.

The M82A1 is available in the Mystery Box in all maps except Origins. The weapon is rather weak, as it boasts very low accuracy, mediocre damage, barely manageable magazine capacity, extremely high recoil, and a sniper scope by default (which can be a hindrance in close quarters, where most action will take place). With its poor traits, the Barrett M82A1 is a fairly inefficient weapon on later rounds, even though it is effective in early rounds.

When Pack-a-Punched, it becomes the Macro Annihilator, and gains increased damage and ammo capacities, as well as a Variable Zoom scope. The Macro Annihilator also gains improved hip-fire accuracy, as if it were to have a laser sight.

The Barrett M82A1 in first person

The Barrett M82A1 after being Pack-a-Punched in Zombies; note the variable zoom scope

Render of the M82A1's model, with the raised carrying handle gained when the variable zoom is attached

Render of the scope's model

The Barret .50cal returns in Call of Duty: Black Ops Cold War as the M82.

The M82 is used by Spetsnaz in the campaign, and can be found in the missions "Redlight, Greenlight" and "Operation Chaos". The M82 is capable of downing a heavy trooper quickly.

The M82 can be brought into any map via Create-A-Class, at Loadout rarity and and appears as wall-buy in Firebase Z at Uncommon rarity, costing 2,000 Essence and is located in the Scorched Defence location, placed before the right most defensive structure. It can be rolled from the Mystery Box at the cost of 950 Essence and can appear as a wall-buy in Outbreak gamemode, both in any rarity. When upgraded via the Pack-a-Punch Machine, it becomes the Anathema gaining increased damage and magazine size. 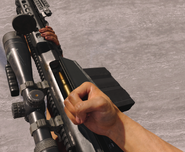