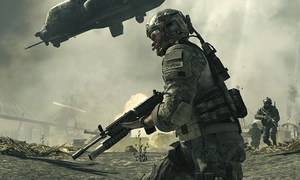 President of the United States

Overlord: "Metal 0-1, this is Overlord Actual. You are being re-routed for Hamburg. We've got a principal level hostage rescue."
Sandman: "Who is it?"
Overlord: "The Vice President."
— Overlord briefing Sandman on the hostage situation.

The Battle of Hamburg was a battle that took place during World War III, during the events of Call of Duty: Modern Warfare 3. It follows the Delta Force operatives that were sent to Hamburg, Germany to rescue the Vice President of the United States as the Russians launch a strategic offensive against the continent after it was softened by the October 6, 2016 Terrorist Attacks.

After the chemical attacks spread across Europe, the Russians launch a massive strategic offensive against the continent. Hamburg is one of the cities targeted, and it is of special importance, as the American Vice President is in the city to originally discuss a peace treaty with the Russian President, who were kidnapped by the Inner Circle of the Ultranationalists. Due to the knocking out of all communications because of the attack, the Russians push forward rapidly, taking Eastern and Central Europe, including Hamburg, within hours. The Vice President's convoy was caught by the Russians and it, as well as the VP, are all taken prisoner. After realising that the VP, codenamed Goalpost had lost contact, Overlord sent in reinforcements to all fronts fighting the Russians, and to rescue the VP, Delta team Metal was sent to Hamburg with a large strike force to reclaim Hamburg and rescuing the VP.

Battle to secure Hamburg and Goalpost

The battle starts off with an amphibious assault supported by troops inserted by Ospreys and landing craft carrying M1 Abrams tanks. Heavy Russian missile and anti-aircraft fire downs several Ospreys and helicopters but the majority of the landing force makes it onshore, meeting strong resistance. They, including Team Metal, fight their way inland, with many of the Abrams tank and the T-90's destroyed in the battle. 2 M1 Abrams, callsign Rhino 1 and Rhino 2 penetrated the enemy lines and began assisting the Rangers and Team Metal to push the Russians back. Metal then proceeded to the last location of the convoy, having lost both Rhino 1 and 2, but with the crew of Rhino 2 joining the assault. Metal then rescued the VP and one of his staff members and moved them out of Hamburg by an Osprey helicopter.

With Goalpost secure, the Russian forces don't have a leverage to the US in case of any retaliation attacks, thus securing the US in the diplomatic side. US forces then defeated the Russians and pushed them out of Hamburg, and securing the city. Metal then was put on standby by Overlord and awaited further instructions.

View of the Vice President while he is captured.

View of Sandman during Goalpost.

Goalpost (left) and President Vorshevsky (right) in a previous cutscene.
Add a photo to this gallery
Retrieved from "https://callofduty.fandom.com/wiki/Battle_for_Hamburg?oldid=2446785"
Community content is available under CC-BY-SA unless otherwise noted.