The Tirpitz is a German Bismarck-class battleship encountered during the mission "Battleship Tirpitz" in the campaign of Call of Duty. The 830-foot ship serves as the entire level.

In Call of Duty, Captain Price, Sgt. Evans and Sgt. Waters go aboard the Tirpitz on an undercover mission which involved sabotaging the battleship so it would be an easy target for the RAF. At that time, the current crew size was a skeleton crew. Captain Price and Evans board the ship, while Waters stayed behind. The team was attempted to destroy the engines and the AA Radar controls for the Tirpitz. Price used his skills in German and a fake ID to slip past security. The two managed to get below the armory, but not before their cover got blown. Captain Price is killed in the ship's armory while Evans is planting the explosives. Alone, Evans had to destroy the AA radar, retrieve the logbook from the bridge, and escape. He and Sgt. Waters leave on a boat and the mission concludes. 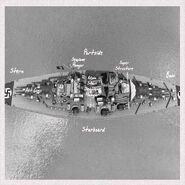 Mission plan created by Infinity Ward. In the final mission the start location is moved from port astern to the starboard bow.

Reference image used by Infinity Ward.
Add a photo to this gallery
Retrieved from "https://callofduty.fandom.com/wiki/Battleship_Tirpitz?oldid=2486811"
Community content is available under CC-BY-SA unless otherwise noted.