BayView is a multiplayer map in Call of Duty: Ghosts that is available in the first downloadable content pack Onslaught, which was released on January 28, 2014 on Xbox platforms and on February 27th for all other platforms.

BayView is set on a small marina boardwalk in California.

The map is mostly close-medium range, with a few good spots for sniping. These spots are on top of the lighthouse, at the windows of the building across from the lighthouse and the space right outside of this building which has a ladder for getting up to it. The rest of the map is best for assault rifles and submachine guns.

Players go to the south side of the map, walk to the south east edge, crouch, and look through the fence at the dock to the east and hanging below is an upside-down dome-shaped Extinction Egg that can be shot and count as "hunted", only once. Players who find all four Extinction Eggs in each of Onslaught's four DLC maps will earn a bonus 2000XP for completing the operation.

BayView in the Onslaught DLC preview.

A view of the stage 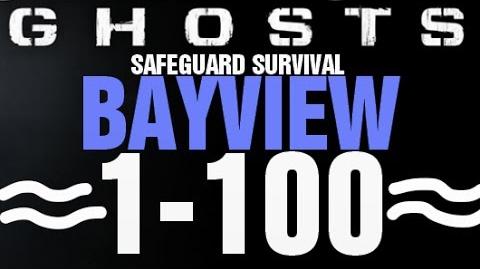