"Fix bayonets, use them if you have to!"
— Sergeant Sullivan in "Little Resistance"

In the campaign the bayonet is most commonly found attached to Arisaka rifles dropped by Japanese Banzai Chargers, in which case the weapon is called the "Arisaka Bayonet", but it is also found attached to the M1 Garand in the mission Little Resistance, used by the Marine Raiders as well as the player. In Multiplayer, a bayonet stab will kill the enemy instantly just like the knife. In campaign, the enemy will get a sucking chest wound, and will stand while holding their wound in pain before dying. Bayonets are also mentioned in the mission Ring of Steel, by the Commisar in his speech at the beginning of the level. However, it is never actually seen used by the Red Army or Germans in the campaign.

Kills from the bayonet in multiplayer will count towards weapon challenges, with the exception of the M1A1 Carbine, M1 Garand and Kar98k, which go toward knife challenges.

The M1897 Trench Gun's bayonet has the ability to Gib enemies, a feature that no other bayonets have.

A scoped Mosin-Nagant with a bayonet, available through the use of mods.

A Marine using the Bayonet in the campaign mission Breaking Point.

A Banzai Charger stabs the player with his bayonet.

Weapons Available to Use With

The bayonet was also going to be available to the SVT-40, but was cut.

An unusable bayonet attached to a Type 99 in Final Fronts. In Call of Duty: World at War: Final Fronts, a Banzai Charger will drop a Type 99 rifle equipped with a bayonet. Although they can use this against the player, the player will not be able to stab the enemy with the bayonet since the melee action is performed with the rifle's butt stock.

The Bayonet was scheduled to appear in Call of Duty: Black Ops as an attachment for the AUG but it was cut. It can still be found in the game files if the official mod tools are installed.

The Bayonet on the AUG in Zombies.

A close-up of the Bayonet on the AUG.

The Bayonet is briefly seen in Black Ops II in the "Old Wounds" introduction, where there are many attached to L85s.

The Bayonet returns in Call of Duty: Black Ops III, available exclusively to the NX ShadowClaw.

The NX ShadowClaw with a Bayonet

The Bayonet returns as an attachment in Call of Duty: WWII. Players can perform a charge while the attachment is equipped on a rifle.

In the level "Operation Cobra", the M1 Garand with a bayonet is the starting weapon of the mission. The bayoneted weapon dropped by allied NPC's can also be found throughout the campaign.

The Bayonet returns in Call of Duty: Black Ops 4 as an Operator Mod for the Vapr-XKG. It allows the weapon to execute a lethal melee strike. Within Zombies, it deals a fatal strike until round 10 with the Pack-a-Punch Machine having no effect on the damage dealt by the strike. A similar though differently named Operator Mod is also available on the Strife pistol referred to as the Stiletto Knife.

In Call of Duty: Modern Warfare, the Bayonet appears exclusively as a muzzle attachment for the AK-47 assault rifle. It is functionally similar to the Breacher Device.

The Bayonet appears in the campaign mission Break on Through, performed by a Viet Cong soldier and on the Escape Plan blueprint for the AK-74u, having been taped on to an Infantry Compensator. It is not functional. 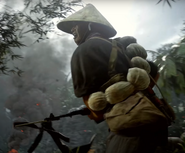 Escape Plan Blueprint with the Bayonet.

"Bayonets are lethal, longer range melee options but are a bit slow to use."
— Vanguard Description

The Bayonet returns in Call of Duty: Vanguard as an attachment and featured in the campaign.

The Bayonet is seen in the campaign level Numa Numa Trail used by Banzai Chargers in the Imperial Japanese Army.

In multiplayer, the Bayonet appears as an underbarrel attachment for every Assault Rifle, Marksman Rifle, and Sniper Rifle. It boosts the range of your melee and enables one shot kills at the cost of swing speed.

For the AS44 and Kar98k, it blocks the ability to equip muzzle attachments. 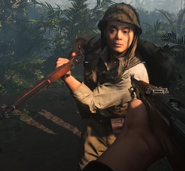 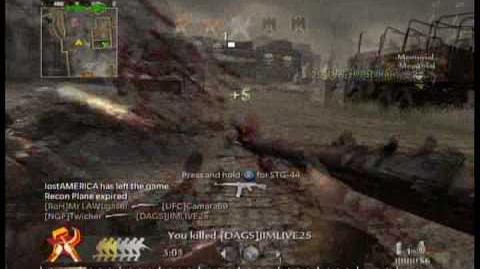