Behemoth is a multiplayer map in Call of Duty: Ghosts that is available in the Devastation DLC pack.

Behemoth is set atop a massive earth excavation platform.

The map is mostly only for close-medium range combat, with no real sniping spots available. Due to this, submachine guns, shotguns and assault rifles are the best weapons to use. However, light machine guns and marksman rifles without scopes can also be effective if used correctly.

When next to the Federation spawn on the northwest side of the map, look down west and the Egg is hanging off the bottom of the excavator.

A view of Behemoth

Another view of Behemoth
Add a photo to this gallery 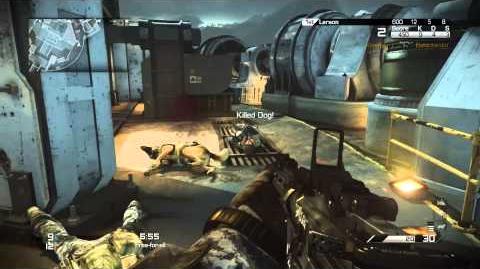 Call of Duty ghosts behemoth free for all gameplay
Gameplay in Free-for-All.
Add a photo to this gallery
Retrieved from "https://callofduty.fandom.com/wiki/Behemoth?oldid=2489721"
Community content is available under CC-BY-SA unless otherwise noted.