Call of Duty Wiki
Register
Don't have an account?
Sign In
Advertisement
in: Call of Duty: Vanguard Zombies Characters

"Our strength is yours..."
— Bellekar

Bellekar, also known as Bellekar the Warlock, is a character featured in Call of Duty: Vanguard Zombies mode. She is a deity of the Dark Aether.

Bellekar the Warlock is one of the many Elder Gods that reside in the Dark Aether. She is a historian of sorts, as she has proclaimed to have "written the histories of the Netherwars" as well as witnessing mankind's wars against itself. Bellekar was present during the Netherwars; Kortifex the Deathless' brutal campaign of conquest within the Dark Aether. A resistance formed against Kortifex, which Bellekar affiliated with alongside Norticus the Conqeuror, Saraxis the Shadow, and Inviktor the Destroyer. Bellekar, along with the four aforementioned deities, would become trapped in various artifacts that made their way into the "realm of mortals". Bellekar herself would become trapped in a mask known as the Mask of Bellekar. After arriving on Earth, Bellekar came into contact with the Mayans of Yucatán, who she held a special attachment to. She attempted in vain to teach them rune magic.

These artifacts would be discovered by Wolfram Von List and Die Wahrheit, remaining dormant in their possession. However, the breaching of the Dimensional Membrane at Poland by Projekt Endstation activated the artifacts. Kortifex, through his own artifact, would bond with Von List and allow him to command an army of the dead. The artifacts of the revolting gods would make their way into the ownership of Allied operatives deployed to Stalingrad, bonding with those who wielded them. Specifically, the Mask of Bellekar utilized the power of Aether Shroud.

"Share your insights. Let me know what you're thinking. The more I understand your ways of war, the more I can help you. Secrets have their place in combat, but keep nothing from me. You would only be hurting yourself."
— Bellekar

Bellekar is described by Gabriel Krafft as kind and benevolent. She is self-admittedly curious and loves to learn new things, which drew her to the Mayans. Out of all the entities in the Dark Aether, Bellekar has the most positive views towards humanity. She seems to view herself as a teacher to them, affectionately calling them "pupils".

A drawing of Bellekar's rune by Gabriel Krafft. 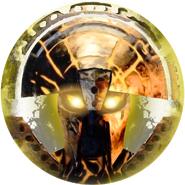 Bellekar, as seen on the Aether Shroud icon.
Community content is available under CC-BY-SA unless otherwise noted.
Advertisement