Belov (Russian: Белов) was a Red Army soldier who appeared in the Call of Duty: Black Ops mission "Project Nova."

Belov was one of the Red Army soldiers loyal to Captain Viktor Reznov, taken on the mission to capture Friedrich Steiner in 1945.

He later followed his team to the abandoned ship. Reznov ordered Belov, along with Nevski, Vikharev, Tvelin and Petrenko, to follow him in. The group successfully reached the Nova 6, but Major General Dragovich, eager to see the effects of the weapon, ordered Reznov's six men to be placed in gas chambers and have the gas tested on them. Belov was placed with Vikharev and Petrenko in the first chamber, and died alongside them when the gas was released. 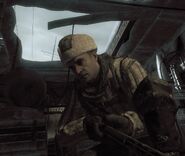 Belov taking cover.
Add a photo to this gallery

Retrieved from "https://callofduty.fandom.com/wiki/Belov_(Black_Ops)?oldid=2540889"
Community content is available under CC-BY-SA unless otherwise noted.