Benjamin Lee was born in 1992, he became orphaned at the age of three and was raised as a "ward of the state". His juvenile criminal record includes several counts of larceny, burglary, vandalism, public intoxication and aggravated assault.

In June 2011, at the age of 19, Otter gained international fame after thwarting an Al-Qatala knife attack in Hyde Park, London. He beat the suspect unconscious while onlookers watched and recorded the event. Two months later, he joined the British Commandos.

Lee thrived in training and entered the SAS selection on recommendation by senior officers. He passed the selection in January 2012. Otter was deployed to operations in Iraq, Afghanistan, Libya, Somalia, Yemen and Urzikstan. He served under Captain John Price in at least seven operations. Price describes Otter as a ruthless, capable soldier but often overzealous.

Lee developed a friendship with Jackson Wyatt during a joint SAS/Australian Special forces operations in Afghanistan. Psychological evaluation of Otter describes anti-social tendencies suggesting his friendship with Wyatt is unique.

Otter appears in Call of Duty: Mobile and was added during Season 10 The Hunt as part of the Amphibious Assault Crate

"Crew Expendable" skin available to players who own Operator Edition.

Otter in the Comics. 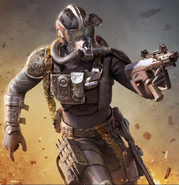